You are here: Home / Featured / Floods and floods of fangirl tears – An Adventure in Space and Time – Dork Review 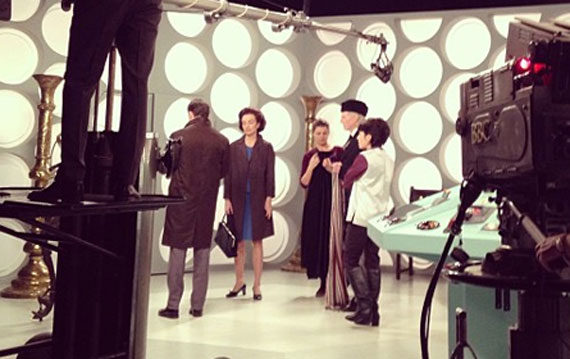 Mark Gatiss has been a link in the Doctor Who chain for longer than you may think. He was among the crop of future Who-writers who worked on the Virgin New Adventures novels , along with the likes of Paul Cornell and Gareth Roberts. He also wrote audio plays for BBV and Big Finish Productions and wrote some of the best episodes of the early revived series.

He is also now responsible what may well be the best one-off TV drama of 2013. Well, if not the best than certainly the biggest tearjerker…

Spoilers behind the jump, of course. If you haven’t seen it, what are you waiting for? Get to iPlayer!

No bug-eyed monsters and robots…

Spanning the length of William Hartnell’s tenure as The Doctor, An Adventure in Space and Time begins with a flash-forward to his last day of filming. Disheartened and saddened, Hartnell (played by David Bradley) steps onto the set in costume. As he closes his eyes, we are taken back to the beginning of the show.

No-nonsense Canadian Sydney Newman (acting legend Brian Cox), the Head of Drama at the BBC, is tasked with creating a filler show for the Saturday night schedule. Wanting to stay away from any more Dickens adaptations, Newman comes up with the idea of a family sci-fi drama.

After extensive brainstorming with the Script Department, Newman hires his former production assistant Verity Lambert (Jessica Raine) as producer. Together with director Waris Hussein (Sacha Dhawan), Verity sets out to persuade 55-year-old character actor William Hartnell to take on the role of The Doctor.

Hartnell, sick of being cast as the token tough man, accepts the role, and work begins on the first serial. After re-shoots, power cuts and the small matter of the assassination of JFK overshadow the initial broadcast of An Unearthly Child, Verity is called before Sydney, who tells her they should just junk the show entirely.

Verity makes a passionate plea for the existence of the show, and the script of the second serial – which contains the one thing Newman wanted to avoid: robots.

Actual genesis of the Daleks

But Verity stands her ground, and effectively saves the show from burning out before it’s even properly started. With the second serial, The Daleks, a success, and the imagination of children everywhere captured, the show blossoms into a success.

But as time goes by, things begin to change. Waris leaves the show, followed soon after by Carol Ann Ford (who played Susan Foreman, here played by Claudia Grant).

Hartnell, meanwhile, blossoms as the show gives him a new lease on life – a scene in which he is recognized by adoring children while in the park with his wife Heather is particularly fun to behold. But there is a shadow looming over his role: the occasions where he forgets his lines are becoming more frequent, and castmates Jacqueline (Hill, played by Jemma Powell) and William(Russell, played by Jamie Glover) are witness to an incident where Hartnell calls the new director by Waris’s name. 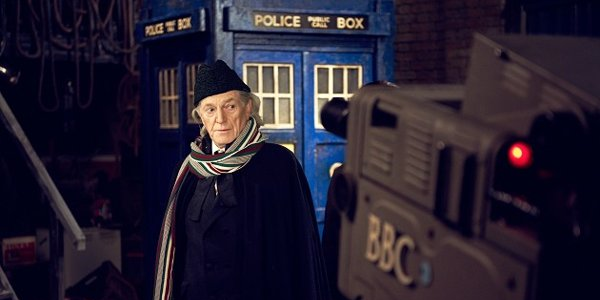 In the end, the cast changes (Hill and Powell leave as well, and a flood of new actors follow), Hartnell’s health takes a turn for the worse and, to cap it all off, Verity leaves the show.

After Verity leaves, Hartnell becomes increasingly difficult to work with. Eventually, with complaints mounting and a need to refresh the show, Newman comes up with the idea of “regeneration”, allowing another actor to take over from Hartnell.

Immensely saddened, Hartnell breaks down in the arms of his wife, declaring “I don’t want to go”. But eventually, he films the last scenes of his last episode, with his successor Patrick Troughton (Reece Shearsmith) looking on in the wings.

Oh the tears. Oh the floods of tears.

Essentially delivering a love letter to Doctor Who, Mark Gatiss succeeds in making this one-off drama into something warm and nostalgic, but at the same time heartwrenching.

It’s full of incredible detail. There are scenes filmed at the BBC Television centre, cameos from the likes of William Russell, Jean Marsh and Carol Ann Ford and the inclusion of just about everyone central to the story (down to Delia Darbyshire, the creator of Ron Grainer’s theme tune recording).

There’s even a cameo from voice of the Daleks Nicholas Briggs, playing… wait for it… Peter Hawkins, the man who originally voiced the Daleks (and Cybermen). Meta-casting at its best!

But, as I said, it’s a heart-wrenching watch. Jessica Raine as Verity and David Bradley as Hartnell are the emotional centre of the story, with Bradley in particular delivering a note-perfect performance. To watch Hartnell struggle to hold on to the role he loved so much, eventually having to let it go is tough going – especially in the scene where he breaks down and confesses that he doesn’t want to go.

Raine’s performance as Verity meanwhile, is a delight. In Verity Lambert, Who had its first cheerleader. She defended the show with tooth and nail, stood her ground in the male-lead world of sixties BBC and had more faith in the Daleks than anyone else. And seeing as they are a central feature of tomorrow’s celebratory episode, she was right to have faith.

Oh, and just when you think it can’t get any more affecting – look out for the incredible and unexpected cameo by Matt Smith at the end of the show. If you’re not in bits by that point, you will be.

All in all, wonderful, heart-warming and heart-breaking television. Roll on The Day of the Doctor – and an industrial quantity of tissues, please. Something tells me we are going to need it…

Browse the Doctor Who tag on Dork Adore for more Who-goodness!