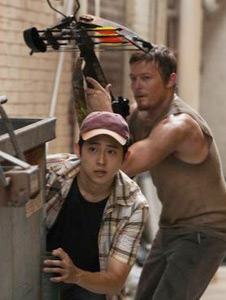 It seems like The Walking Dead has barely started, and yet we are two thirds into the first season. That already-ordered second season of thirteen is some comfort, but still. God knows how we cope in Britain, where everything only gets six episodes.

Anyway, the incremental, atmospheric advancement continues this week. It’s apparent that we will only get one major story throughout the season, but there’s some detours for world-building, and a bit more zombie action.

Whilst venturing back into a ravaged city to search for that hick they left behind, our heroes stumble across a gang of scavenging youths. Or so it seems, until they discover said gang are actually the regional division of Age Concern, protecting the nearly-dead from the hungry-dead.

To be honest, this didn’t entirely work for me; I preferred it when they were a pack of ravenous predators. The reveal seems to make little sense when thought through, aside from providing a twist in this particular episode. Why in hell didn’t their kid hostage reveal the truth once he was sure they weren’t zombies?

Oh well. Much of the rest was really good, and the absence of Merle is making me very nervous about how he might wreak his revenge, or perhaps how he might have already done so. (Vague reference to ending of episode.)

Meanwhile, Back At Base Camp

Despite the absence of our cowboy hero, I rather enjoyed the base camp sequences this time, as the characters outside of the Grimes family got some moments. The two sisters in the boat, in particular, was lovely.

And the ending was heart-wrenching, but since I already spoiled that Age Concern thing, I’ll not talk too much about that.

In trivia, this episode was written by Robert Kirkman, writer of the original The Walking Dead graphic novels. I’m not sure whether the gang/nurses twist I criticised above would’ve worked better in comic form; the gaps would surely remain.

Still, the strong bits of this episode are very strong; I remain very much invested in the fate of our survivor’s group. But, I must admit, this was one of the weaker Walking Dead episodes so far. A big part of the appeal has been a post-zombie world that seems human rather than silly, and the gang-protected nursing home was a bit much.