You are here: Home / Gadgetry / Roku Player – Easy TV Streaming For The People 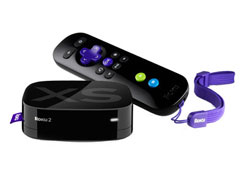 Recently, I got the chance to try out a Roku player for the greater glory of Dork Adore, and I must admit, I was intrigued. Is the introduction of streaming boxes a step towards the redundancy of shiny discs? In the far-flung future, will we stream everything we ever want to watch from a central server?

In short, is a Roku player basically a jetpack? Or not quite that awesome?

Well, if jetpacks had the same dimensions as Roku players, that would be an amazing start. These things are the size of a squarer matchbox. And set-up wise, had no trouble plugging and starting up, some fiddly web set-up before plunging into television, but I imagine that will be the way of these things. I’d rather type registration details into a computer than use the remote control, so I can see their point.

More disappointing, at times, was the loading time of some menus. The Roku is using my home wifi to pull those down, so why the one-to-two minute waits? I could load ten web-pages in that time. And the programmes streamed fine, so I don’t think it’s a wifi speed issue.

That aside, the interface itself works as well as it could, although using a remote control will always feel clunky compared to computers or smartphones.

Anyway, content is more the issue here. Roku provides its material as “channels”, including known quantities like Netflix and iPlayer, plus more obscure items. Netflix is definitely the best source of material, and if you have a Netflix account and no other way of getting it on your TV, that could justify the purchase of this box by itself.

iPlayer is pretty good too, and there are other channels for passing novelty amusement. (A channel for displaying Facebook photos on your TV! A channel showing only classic Superman cartoons!) Oh, and you can play Angry Birds with Wii-style remote gestures, which is a fun distraction, though not sure it’s worth buying a unit for.

In fact, to be honest, the problem with the Roku is that although it works efficiently (with occasional slow menus), many tech-friendly customers will have a console or set-top box that lets them use Netflix and iPlayer on their TV already, or will be happy to wait for the potentially more interesting Apple TV. But if the above does fit your needs, I can confirm it is a perfectly good stepping stone along the way. And it’s about the right size for a stepping stone too.

More details about the Roku player are available from, surprisingly enough, their website.