You are here: Home / Film + TV / Why you shouldn’t watch The Walking Dead 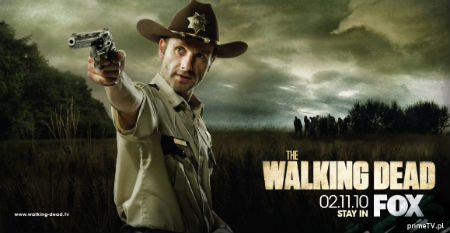 Next week the television adaptation of Robert Kirkman’s epic zombie comic series, The Walking Dead, hits our screens courtesy of FX (via AMC).

You probably knew that already. You’ve probably seen the huge billboard posters with Andrew ‘Egg’ Lincoln’s stubbly, resolute face staring out of them. You’ve probably read a broadsheet article about Frank ‘Shawshank Redemption’ Darabont’s involvement with the project, and you’ve probably watched the startlingly effective trailer on YouTube (see below) and revelled in its clever use of the Walker Brothers hit ‘The Sun Ain’t Gonna Shine Anymore’.

So if you know everything there is to know about the Walking Dead already, why am I writing this article? Well, I’m writing this to beg you not to watch it.

Let me clarify: if you haven’t read The Walking Dead in comic form, then please, for all that is good and holy (or at least, undead and slightly mouldy), go and buy it now; hole up in a safe place with plenty of tinned food, and read it from cover to cover. Then, and only then, should you venture out into the world again to purchase the box set or watch the repeats.

Why am I saying this? Because I really, genuinely believe that if you watch the Walking Dead before you experience the comic, then you are denying yourself one of the most fantastic pop culture experiences of the past decade.

Think I’m exaggerating? Go and find someone who watched Zac Snyder’s Watchmen before they read the graphic novel. Ask them how that worked out, and remember to duck and make a note of the nearest exits as you do it.

Happily, I think The Walking Dead will make a much easier transformation to the screen than Watchmen did. Alan Moore’s superhero masterpiece was all but unfilmable (not that this stopped Snyder obviously), while Kirkman’s undead opus seems to have mirrored the ambition, scope and format of the ‘New Golden Age of Television’ (TM) that we’ve been lapping up for the past ten years, with a large cast of characters, unabashed violent imagery, unbridled swearing, and sheer unpredictability, all of which make it a cultural bedfellow of The Sopranos and Deadwood, as opposed to the blockbuster Hollywood comic adaptations like Spiderman and Batman.

I should emphasise here: I’m not being a comic snob. Honestly, I’m not. If I wanted to do that I could bang on about how waiting a whole month for the next issue to come out, and digesting the story over five long years is the only way to experience The Walking Dead. But that’s bollocks, so I won’t. And I won’t say that the comic is better than the TV series because it came first, or even because the comic medium is somehow inherently just ‘better’. Because that’s bollocks too.

What I will say is this: The Walking Dead is one of the finest comics I have ever read. And if the word ‘comic’ causes you problem, then let me rephrase… The Walking Dead is one of the finest stories I’ve ever read. It’s the only comic to make me physically gasp out loud as I turned the pages. I have never cared so much about comic characters as much as I have the ones Kirkman has so wonderfully created here; and the numerous narrative devices, plot twists, and heart-wrenching tension that arrive with each issue are so deftly delivered that you almost forget that there’s a zombie or two waiting to be decapitated just around the corner.

And I don’t care how carefully Darabont and co spin their celluloid, they’re never going to get close to the pure gold of the original material. And so why would you risk diluting that experience by watching the TV show first?

Go now. You have until Friday to track down at least the first trade paperback (although the Compendium Vol 1 is a very handsome volume, and a snip at £30). You won’t regret it, I promise.

Nick Bryan will be reviewing The Walking Dead for Dork Adore every week. The show starts on Friday 5th November on FX.