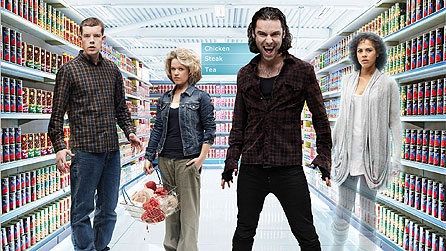 Do you remember The Sixth Sense? I’ll never forget the indignity I suffered at the final dénouement, as it transpired, shockingly, that Bruce Willis had spent the entire film with a gunshot wound the size of a teacup in his lower back. I had been too engrossed (or dim) to spot the silent treatment he’d received from everybody he met, the fact that his wife had thrown out all her non-black clothes, and that even the Reader’s Digest had stopped sending him Prize Draw invitations.

Plainly put, he was dead, and neither Brucie nor I had known it.

But what if the dead just didn’t get it? This was the premise of Episode 3 of Being Human, which saw Annie the ghost collect another wandering soul, a ‘Type 4‘ (or ‘Zombie’ to the uninitiated) called Sasha. Sasha was a Welsh WAG, the belle of rugby league player, who enjoyed nothing more than a night out and a good fight at the end of it. Zombification (post car accident) had done her few favours; recent consequences included hideous disfigurement, torture and being impaled on her boyfriend’s Man of the Match trophy.

Still, Sasha didn’t understand that she was dead. At one point I wondered whether the writer was building up to some kind of social commentary. ‘Don’t be dead-ist!’, Annie chastised an unsympathetic Mitchell. Yet it soon emerged that conversely Sasha, as she came to terms with her death,  could teach us a little something about living. ‘Seize the day!’ she quoted to Annie, as she eventually departed for the great beyond.

It’s nice to know that WAGS have a working knowledge of the Classics. She even extolled the virtues of having children to a pregnant Nina, who after a recent full moon fling with George had been anxiously weighing up whether to bring up a were-child.

Annie, Get Your Guy!

Meanwhile, Mitchell was busy fending off the advances of a psychotic fan-boy, and reflecting on the more amorous advances of his flatmate, Annie. The first dilemma was easily solved — Mitchell killed him. The latter ended more predictably with Mitchell, having initially expressed concern, mainly as to whether one could actually perform coitus with a ghost, soon engaged in a lengthy and passionate snog with the spectral Annie. Hopefully this put his fears aside. After all, vampires, for all their inner torment, can be quite uncomplicated creatures.