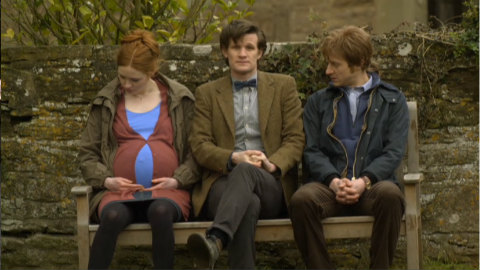 A potential turning point in Doctor Who this week, as Amy Pond must finally decide where her heart lies: thrilling adventures with the Doctor, or a quiet life with Rory – a man who would be sensible and dependable if he could only stop falling over.

Rather than a whole episode of Amy listing pros and cons at the kitchen table, they’ve dramatised the dilemma as a lengthy dream sequence. Fortunate, as I’m not sure the TARDIS has a kitchen table. Or a kitchen.

This Amy-centred plotline, happily, means lots of time with Karen Gillan. She does a great job with her inner conflict, defiant in defence of both worlds until forced to choose. At this halfway point in the series, I hope Amy Pond doesn’t abandon ship at the first available finale episode, as she’s made this new era work just as much as Matt Smith. (He’s good this week too.)

Devoting entire episodes to dreams can risk seeming undramatic and inconsequential, but this is circumvented by presenting a ‘real life’ danger and giving great weight to Amy’s titular choice. Even if huge chunks of this story were a dream, she doesn’t know that. A theme, by the way, which is nicely built throughout.

And now Amy has made said decision, and Rory is going to be  sticking around, hopefully he will stop harping on about his jealousy. In fairness to Rory-actor Arthur Darvill, the above is not his fault and his portrayal of the pleasant, yet never suave, chap is very endearing. You may recall I said something similar last week, but they didn’t take note. Next time: BLOCK CAPS, IN BOLD!

This week’s writer is Simon Nye, of Men Behaving Badly fame, and it’s a good debut, I think. In fact, considering his comedy roots, this was straight-faced even by Who standards. And it’s not the first time a writer has successfully come to Doctor Who from a background of sex-obsessed sitcoms: Current Who-premo Steven Moffat was best known for the brilliant Coupling before he started typing about Time Lords.

Also in for one week only is Toby Jones, as the Dream Lord. He’s an archetypal mischief-maker, causing trouble because he can, and it could have been a thin part, but Jones deftly marries the fun and the sinister here. Not to mention the revelation about his true identity, which almost made this reviewer re-watch the episode to see what the knowledge added.

So, in my unimportant opinion, Team Who have successfully navigated the dream sequence minefield without it seeming meaningless or, worse still, turning into a rubbish Holodeck episode of Star Trek. Good for them.