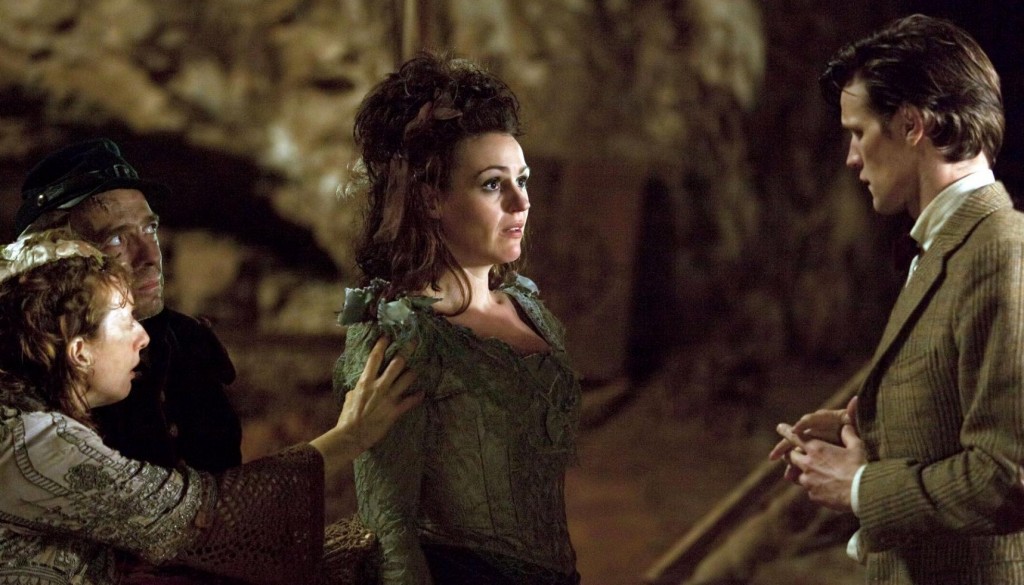 I usually leave the Doctor Who reviewing in the super-capable hands of my dear colleague Mr Nick Bryan, but sometimes an episode comes along that I can’t help but throw in my two-penneth about. And I’m afraid Neil Gaiman‘s superb story The Doctor’s Wife is one such episode…

The Doctor wants a wife

Yes, when we saw that this episode was named The Doctor’s Wife, I’m sure I can’t be the only one to assume that we’d be getting a lot of River Song back (front?) story. But in fact, the wife in question was the Doctor‘s one true love, the one who has been with him through thick and thin: the Tardis itself. The Tardis made flesh.

We have, of course, seen Rose use the energy of the Tardis (another *great* episode, by the way), but this was something quite different — the little blue box’s very soul pulled out by a voracious planet-sized alien ‘House’ and placed into the failing body of Idris (Suranne Jones).

Talk about your shipping and slash-fiction, this is the love affair that really gets the Whovians giddy. And it was so beautifully done – Suranne Jones was quite brilliant as the Tardis suddenly given a voice; by turns playful, wise, funny and contrary, and her part was written with such delightful lightness of touch. We — just like the Doctor — met the Tardis for the first time last night, and it was important, vital even for the show that we liked her. I certainly did.

There was a fantasy weirdness to the whole episode too which gave it an unusual, but lovely tone, and it was really nicely paced, with the Doctor and Idris doing timey-wimey wizardry to create a whole new Tardis while House messed with Amy and Rory as his little playthings inside the blue box. And, excitingly, we saw so much of our Tardis  — corridors beyond the main control room, and even a brief return to the organic Tardis inhabited by Doctors 9 and 10, Mickey, Rose and Martha.

Overall, this was a real love-letter to the Tardis, beautifully written and with a stand-out performance from Jones. Who’d have thought the words ‘Hello, Doctor’ could get us all so emotional? For getting inside the head of the Tardis, indeed the head of the show itself, Neil Gaiman is to be applauded.

Never before has the phrase ‘from the sublime to the ridiculous’ been more fitting, as we turn from one of the greatest New-Who episodes to The Eurovision Song Contest 2011…

Actually, that’s a little unfair, as there was slightly less of the ridiculous than usual, I thought, about this year’s event. The hosts, while obviously terrible, were not so mind-meltingly awful as years gone by, and the standard of songs, while obviously low in the cosmic sense, not so ear-hurtingly bad. Jedward’s Some Girls-esque stomper went down pretty well, as did Blue’s anthemic power-pop (both reached treble figures in the voting) and Sweden’s entry Popular wouldn’t feel out of place in the charts. Germany put on a hell of a show visually and all in all it was, has to be said, rather a lot of fun.

So what gives with the boo in BOO-bang-a-bang? Well, that refers to the result, with one of the blandest songs in the competition, from Azerbaijan, winning. Very dull…