You are here: Home / Featured / Doctor Who – The End Of Tennant 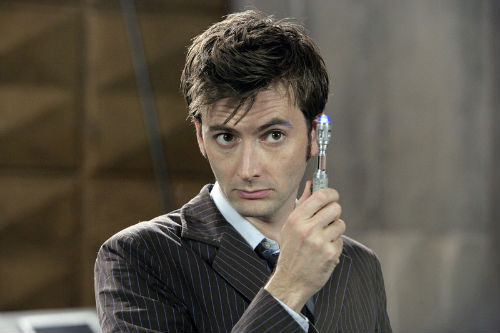 So that’s it. No more Tennant.

Off he goes to America, burning up the TARDIS as he goes and leaving us Nu-Whovians with nothing more than the box-sets to keep us company. Perhaps we will warm to Eleven, the young Matt Smith, but for now, let us mourn the passing of Ten in sombre silence. Or a few-hundred-word blog post since silence doesn’t come across all that well on the internet.

When Russell T Davies gave Doctor Who an unexpected breath of life a few years back, Christopher Eccleston was an undeniably brilliant, grumpy, Doctor, and he deserves praise and kudos for making sure the show didn’t disappear as quickly as it had regenerated. But the fact is, old Chris never really bought into the whole Doctor Who ‘phenomenon’; clearly anxious to avoid stereotyping, he was always going to leave after one series.

David Tennant, on the other hand – importantly a fully paid-up Whovian himself since the age of five – took on the role completely willing to be the Doctor as much off-set as in front of the camera. He has been an ambassador for the show, its greatest defender and, above all, has remained a fan throughout. Despite leaving the programme in dramatic and heartbreaking style, David Tennant is still the Doctor, always will be, and seems rather happy about it.

And what a Doctor. After just one series he was voted the best Doctor of all time, and while that might be attributed to short memories, I have little doubt that he will remain a real favourite because he appeals to so many people for so many different reasons. Kids love Tennant’s Doctor because he is one of them; he’s a big, OTT, bundle of energy who is attracted to danger and has a real love of life. Adults love Tennant’s Doctor because, despite all of that, he is also very much a ‘lonely angel’ who is deeply sad and on the edge of being something rather hideous (of which we saw glimpses in The Runaway Bride and The Waters Of Mars). And, of course, there is the fact that this particular Doctor is rather attractive…

What about Ten’s greatest moments, then? Well, he got off to a bombastic start in The Christmas Invasion (his introductory speech in which he starts quoting The Lion King is just brilliant), he displayed his softer, more sincere side in The Girl In The Fireplace and his unique chemistry with Donna was never better than in the wonderful Fires Of Pompeii. But the moment that will define DT’s tenure for me, will be that look of utter desolation when the Doctor realises he has lost his beloved Rose in Doomsday…

As for the final two-parter, he certainly got quite a send-off. One hour of gun-toting battles with the Master(s) and the corrupted Time Lords, and fifteen minutes of quiet, heart-breaking goodbyes. Sure it was over the top, but seriously, did we expect the greatest Doctor to go quietly? He’s the most ‘human’ Doctor there has ever been – touched by real love and constant loss – and he faced death in a very human way: ‘I don’t want to go’.

Just like the the Noble Wilf, David Tennant, Tenth Doctor, we salute you. Allons-y!