You are here: Home / Featured / Doctor Who: The Pandorica Opens review 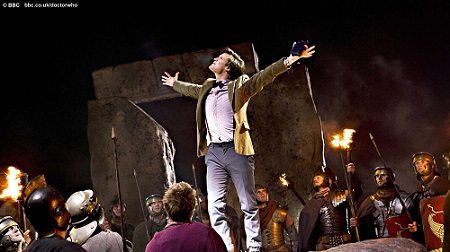 A few weeks back whilst reviewing the first half of the Silurian two-parter, I slipped in some smartarse about how it’s unfair to review the first part of such storylines on their own. I found myself thinking that again, rather more seriously, whilst watching The Pandorica Opens, the beginning of the Smith/Moffat era’s first series finale.

In the case of The Hungry Earth, I was referring to the episode being slow and set-up dominated, which would be somewhat vindicated if the second episode was explosive and amazing. (It wasn’t, sadly.)

This is the other side of the coin: An excellent first half. Pacey, exciting, disorientating and with enough call-backs to previous episodes to make me want to go back and re-watch them. Which is surely a cunning ploy to shift DVDs.

For those hoping for massive revelations, there’s not many here, primarily the nature of the Pandorica itself. Next week’s episode is going to have a lot to go through, but I believe it is an hour long, so we should have time for the Doctor to both explain the whole series and save the day. Just about.

But what we did have here still managed to be a surprise even though I’d guessed part of it. I thought we were heading towards a ‘second Doctor’ stepping out of that box, but no. Not quite. It was a great, crushing moment, as was the not-quite return of Rory.

I’d been hoping for Rory to return in the finale since he died, so it was either cruel or ingenious for Moffat to shove him out there, only to take it back again. But since the episode appeared to end with both Amy dying and, um, the destruction of the universe, I’m expecting to see some roll-backs next week.

And a lot hinges on how they do the un-doing. Previous Who finales got a bit of a reputation for brilliantly setting up a dire predicament, then pulling a solution out of nowhere at the very end. If the new management can knock that trend on the head, they have a chance to make a large number of dorks very happy.

So, yeah, a great beginning to the end. Lovely to see River Song again, and there’s some obvious fan-service in the range of returning enemies too. Genuine surprises and drama and stuff. And does anyone else think the voice saying “Silence will fall!” sounds oddly familiar? Can’t place it though. Another one for next week, I suppose…