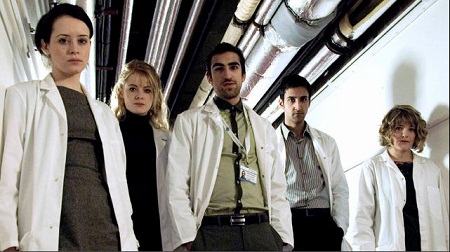 The pilot episode of Pulse, the new BBC3 medical-supernatural horror that aired on Thursday, opens with a messy operation sequence. Ketchup flies, people scream, and if you’ve been scared since childhood of being awake during your own major surgery, it looks like this show will trigger that phobia hard.

The plot involves a young doctor messily stumbling across strange goings on in her hospital. There’s a potential conspiracy and various other things that I won’t talk about, both to preserve the surprise and because I don’t think I’d do them justice. Suffice to say, there’s a reason why this is classified as “horror” rather than simply a tad supernatural.

It’s also swinging more adult than Doctor Who, or even Being Human. Not only in terms of mature content, but there are a lot more characters floating around, a complex storyline and a sense that any words spoken in a given scene could end up being important later.

If there is a “later”. So far, only a pilot has been filmed for Pulse, with the potential for a series if it does well. So if this sounds like your sort of thing and you missed the original transmission, catch it on iPlayer now. If you have an account for the new iPlayer beta ‘social’ features, you can both favourite and recommend it too. The afore-mentioned Being Human began in a similar pilot-only form, so it’s certainly possible to get a full run of Pulse if we put our backs into it.

If you need to hear about some pedigree, the pilot was written by Paul Cornell, who would also serve as lead writer on the potential series. Cornell has written many good things, including the tear-wrenching Human Nature two-parter in Doctor Who’s third year and Marvel’s super-fun Captain Britain And MI13 comic book series.

More important than any of that, it finishes with many mysteries unsolved and I really want to see what happens next. So even if this piece has failed to sway you to watch Pulse properly, would you consider starting it on iPlayer and leaving it running while you have a bath? Go on. Do it for me.

And if you enjoyed it, you can let the BBC know by leaving a comment here on their BBC Three blog.