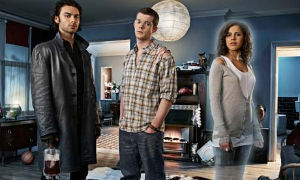 Over the course of two series, Being Human has been balancing its co-existing halves, much like the characters within. The funny flatshare soap, pitted against the gothic fantasy. Neither the show nor its leads have always succeeded in this schizo-juggling, but it’s always been captivating viewing, even if you come away bemused.

In the opening episodes of the second run, as chronicled here, it took a swing into the far reaches of its darker territory, and risked becoming a depressing experience in the process. Luckily, the writers took a chill pill, and the humour crept back in.

As the rest of the story unfolded, happily they kept one foot in their BBC Three sitcom roots. George’s ludicrous werewolf-Tourettes attacks in one episode stood out amongst the angst and gloom, but that’s exactly what’s needed to keep proceedings grounded.

(Yes, his ‘rebound’ relationship was obviously doomed, but that was made so obnoxiously clear throughout that it seems utterly pointless to even bring it up.)

Even vampire Mitchell’s darker journey was punctuated by a bizarre attempt to persuade his group of blood-hungry vampire followers to “kick the habit”, including starting a Bloodaholics Anonymous group. It’s these adult-yet-silly touches which give the show its charm.

Lurking alongside all that is the ongoing storyline, in which the heroes are investigated by a coalition of religion and science. As the middle episodes passed, the soap operatics of the cast intertwined with this increasingly omnipresent conspiracy, raising intrigue as it went.

Alas, I wasn’t as enamoured with the climactic episodes as the build-up. It may be a matter of personal preference, though, as the tone lurched back into full-on gothic misery. There are a few actions in the penultimate episode, by Mitchell in particular, which are certainly shocking, but so much so that it’s hard to imagine him actually undertaking them.

The final episode does provide the necessary drama and resolution, but the ending of the main conspiracy storyline doesn’t entirely pay off all the preceding groundwork. The two prime antagonists, who had been unusually well realised until then, get a bit lost in generic psychopathy and confused motivations.

Still, I can’t say I wasn’t hooked until the very end.  The beauty of the lighter touches in the mid-season episodes is that, even if I roll my eyes at the later brooding melodrama, I still give a damn about the characters and shed a manly tear at the sad parts.

Fundamentally, even with my petty niggles, I was always entertained. And I’ll definitely be back next year.