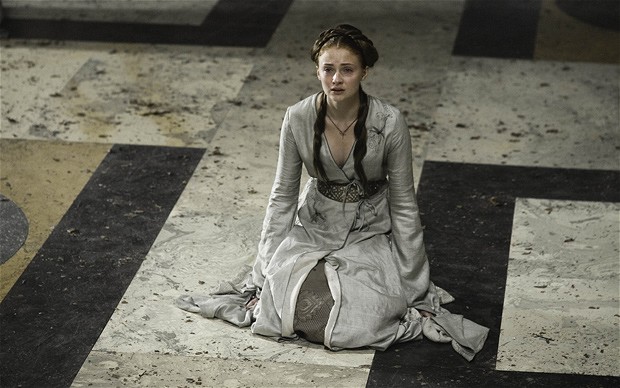 This week the Red Priestess showed off an alarming new party trick, and Tyrion’s birthday present to his revolting nephew got broken on the first day.

You know you’re in Westeros when a couple of cockneys get devoured by a giant wolf in the first three minutes. Robb Stark continued his onslaught before getting all doe-eyed at the sight of a muddy field medic.

Meanwhile, his mother was given a lovely gift in the form of her husband’s body in a giant box. Quite why the usually slick and scheming Littlefinger thought that was an opportune moment to start professing romantic inclinations is anyone’s guess. In fact, Littlefinger came across more as fatfinger as he fumbled his way through a number of terrible diplomatic encounters, including one with Renly Baratheon and another with Margaery Tyrell, his virgin bride

Meanwhile, back at the ranch, the ‘giving people as gifts’ theme continued as a couple of Lord Baelish’s whores took part in King Joffrey’s idea of a good time. As previously mentioned, he really is an odious little scrote — although Jerome  “Bronn” Flynn put it better when he said “there’s no cure for being a c*nt”.

Poor old Sansa continued to sport red eyes, but she showed true Stark mettle once more. She’s one character who’s gone from moany to marvellous in the space of a series. She’s certainly playing the long game on this disastrous relationship. I used to dread her scenes, but now I’m looking forward to seeing how she develops this season.

Her sister Arya has always been marvellous, but she spent most of this episode lying in the mud muttering to herself. Thankfully, just before Gendry could go the “death by hot rat” route, Tywin Lannister cantered in to save the day — or at least to prolong their captivity. What would the world be like without Charles Dance? He really has those steely-eyed, hint-of-a-smile bastard roles sewn up

Just when you think you’ve had your fill of horrors for one episode, something comes along to turn your stomach all over again. After a bout of grammar education courtesy of Stannis “less is more” Barratheon, The Red Priestess got naked and produced a gas cloud from her vagina.

I look forward to the episode where she tells her progeny about his birthday “I lay on my coat in a murky cave and puffed you out of my privates while a man writhed in horror next to me. It was really special, darling.”

So what next? Will Renly get to first base with his wife? Will Dany give her hair a good brush now she’s made it into Qarth? Will Cat be fooled into handing over the King Slayer? Will Tyrion annoy any more relations, and will I manage to avoid my sister and her spoilers? All this to play for and more in Game of Thrones!