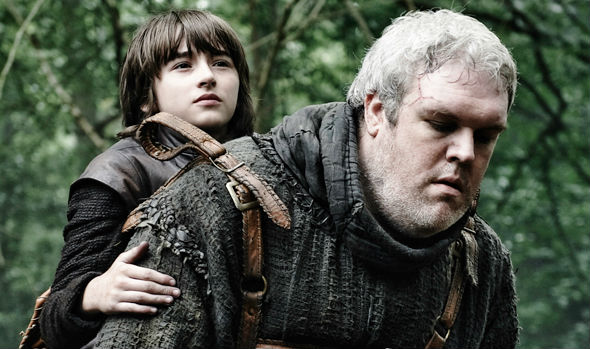 This week, King Joffers failed to read the subtle cues coming from his subjects and a red-head sent Jon Snow into a tizzy.

When it comes to panto villains, the Milky Bar King is Game of Thrones’ reigning champion. It’s all I can do not to start booing and hissing when he appears on screen. This week he started with a spot of gentle baby brother bullying before moving on to ordering the execution of all his subjects. Same old, same old.

Still, that cow pie in the face was mightily satisfying, as was Tyrion’s angry slap, which I could happily have watched every five minutes for the rest of the show.

The Hound displayed some of the affection we’ve all suspected he harbours for poor Sansa, saving her from rape in spite of Joffrey’s indifference. Aww, what a nice, ugly old dog he is, tearing out innards like a sentimental fool.

Top marks this week to the children. Arya (Maisie Wiliams) had some mesmerising scenes with Tywin (the supreme Charles Dance), who’s becoming strangely likeable as the capable leader of a bunch of nitwits, two useless children and a demented grandson. If only he could take solace in Tyrion.

Arya’s last-minute Supermarket Sweep through the streets in hunt of the strange-but-brilliant Jaqen H’ghar had my heart racing, and the final death-blow made me laugh out loud. That whole “three souls” storyline is creepy and strangely amusing.

Theon continues to be a total tool, although Alfie Allen does a great job of making him just a bit pitiable. When he slept with Osha (surprisingly tidy bush of for a Wildling), you had to wonder if he uses his brains to make any of his decisions.

He’s not the only one struggling to locate his brain. Ex-friend, Robb was flirting with the field medic again, while up beyond the wall, half-brother Jon was getting all dewy-eyed over a grumpy red-head. Call me heartless, but I just couldn’t stomach that inevitable plotline and found myself willing him to hack her head off to save us from weeks of watching him mooning and her grinding.

Another storyline I could do without was the one going on in Qarth. If I have to listen to Dany ranting on about blood of the dragon any more I’m going to have to mute all her scenes. “Give me ships! I deserve them! I am blood of the dragon! Bleat bleat bleat”

What else? Cersei’s chilling threat to her brother was met with a terrific glare. Just where will all this end? Will Tyrion suffer for slapping the king? Will Arya get better at playing dumb? Will Littlefinger rat her out? Where will he pop up next? Qarth? And which actress will get her baps out next? All this and more to come!