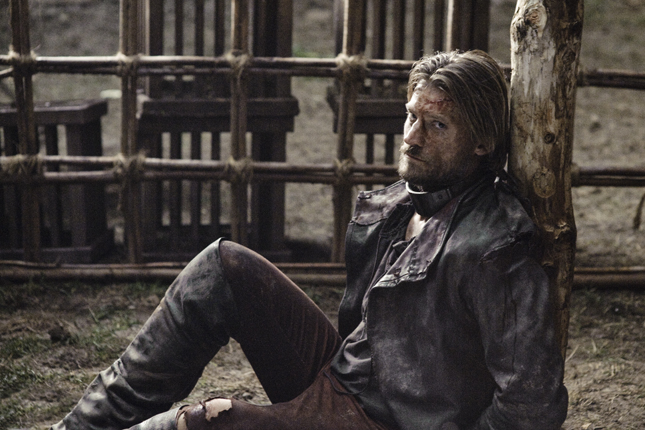 This week, the Kingslayer committed murder without soiling his charisma and Jon Snow looked thoroughly perplexed.

You know it’s all going to be OK when things kick off with a nice long scene between Charles Dance and Maisie Williams. The two of them are a sight for sore eyes, acting their way through a brilliant script. Tywin Lannister is strangely likeable for the head of a ruthless family, which is why I was glad Arya didn’t stab him in the back with a steak knife.

In fact, the Lannisters were all on fine form this week. While Robb Stark made noble noises at his mud-stained field medic, Jaime (remember him?! He used to be in this show) was wallowing in his own excrement and murdering one of his biggest fans.

Like his father, Jaime somehow manages to stay likeable whilst merrily committing acts of atrocity. Maybe it’s because he doesn’t try to pretend he’s anything other than a ruthless warrior. And the twinkle in Nikolaj Coster-Waldau’s eye helps too.

His sister has struggled to find that same level of charm, but this week she grew on me a little. She told poor old Sansa about the love of a mother before confessing to Tyrion that King Joffrey really is a little shit. Even Tyrion felt moved enough to almost give her a pat. It was a lovely moment when the siblings both realised that neither of them were quite ready for that. If Tyrion and Cersei kiss and makeup it will be no fun for us – watching them bicker is a treat.

Two of my least favourite storylines continued with Jon over in Wildling country being goaded by the saucy maid from Downton Abbey. It was less tiresome than last week, however, with the free woman, Ygritte, making some really quite salient points, leaving poor old Jon looking even more surly and confused than usual. Poor ickle diddums. This is turning into something of a gap year for Jon, with the Wall offering an opportunity for him to find himself (and his penis).

Dany over in Qarth is having no such voyage of self-discovery. All she seems to do is lurch from one disaster to the next, shouting on about being queen before slumping into self-doubt and whimpering about the latest crop of corpses she’s responsible for.

Her host Xaro has really outdone himself, shafting the beggar queen whilst shanking the bulk of the 13. Again, this plot thread normally grates, but there were some lovely, creepy moments this week, with the masked Quaith showing she knows a lot about faithful Jorah’s previous treachery.

Theon’s having less fun than he imagined as the new ruler of Winterfell. After battering one of his subordinates for pointing out the truth, he found himself face-to-face with some real-life tar babies.  His cruel glee soon turned sour at the sight of two dead orphans. I almost felt sorry for him, but the murdered children kept swinging into view.

So what next? Will Littlefinger bless us with his continued absence? Will spymaster Varys get another scene again soon (please)? And where will Hodder, Osha and the little Starks run to?

Tell us what you thought! Is Dany annoying you too? Do you feel sorry for Theon?