Phew! What a scorcher! Last night’s episodes was Game of Thrones at its absolute best. This week was all about nail-biting action, drunk Queens armed with poison and an awful lot of green fire. 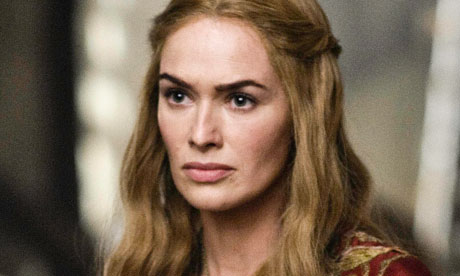 Directed by Neil Marshall, who did the excelled Dog Soldiers, and the slightly less excellent Centurion, the penultimate episode was gripping from start to finish.

In fact, it was so gripping, I wish they’d started off with a polite notice to inform us that we needn’t worry, at no point would they cut away from the action to give us a scene of Dany shouting about blood of the Dragon in Qarth. The longer the episode went on, the more afraid I became.

Thankfully, though, the writers took pity, giving us an entire episode of Lannister- and Barratheon-based war fun.

Cersei, sporting a rather fetching gold breastplate complete with boobies (how the ironmonger must have chuckled), got meaner and drunker as the battle went on. I was disappointed no one thought to stain her teeth red, which would have really finished off the drunk harridan look they were going for.

The Hound failed to live up to his name. Like any true dog, he should have found a spot a bit too near the fire to curl up for a hair-singeing lie down. But the fire – quite rightly – gave him the willies, leading to one of the best resignation speeches I’ve heard for a long time.

Poor old Tyrion spent most of the episode looking like he needed a fear-wee. But instead he rose to the occasion (even if he is “half a man”) and managed to slice off an entire leg in one clean stroke before getting his own face not-quite-sliced-off by someone supposed to be on his side.

In fact, it’s amazing how many people seemed to be slicing off entire body parts in one stroke. If only Robb Stark’s field medic friend, Talisa, could see it. Her hacking technique a few weeks back made sawing through bone look difficult. What a wuss!

Somehow, even while Stannis was slicing off the tops of people’s heads and generally acting brave and ruthless, he STILL managed to be boring. Excellent acting from Stephen Dillane, but I’m slightly concerned it will mean he’ll spend next season locked in a cell giving long, monotonous speeches. Maybe they can trap him with Dany and the two of them can give endless monologues about their blood and their god-given rights.

The wildfire moment was something to behold – unless you’re green-brown colour-blind in which case it just looked like normal fire. (Incidentally, Matthew Vaughn, the director of Stardust hadn’t realised they’d painted Michelle Pfeiffer’s magic fire green because he’s colour blind. Little factoid for you there).

Meanwhile, Sansa continued to be brave, although her little scared face still makes me say “poor Sansa” every time she gets a scene. She should have run away with the Hound. He’s off to the North with his tail between his legs.

What else? It was great to see Jerome Flynn doing a bit of singing again – it’s been too long! (It hasn’t). Shae is shorter than I’d realised (which doesn’t really have anything to do with anything, but I just thought I’d mention it) and Joffrey really is quite the most insufferable character in the whole show. Apparently, George RR Martin sent Jack Gleeson a note saying “Congratulations! Everyone hates you!”