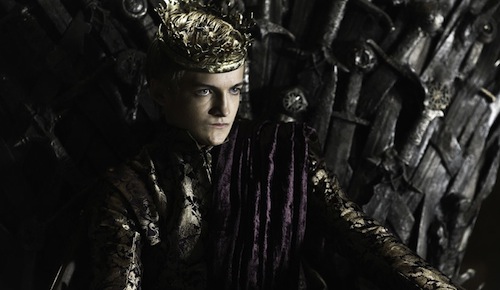 It’s back! And there’s no mistaking how excited everyone was to see it return. Twitter was a-buzz with Stark raving fans all desperate to catch those first glimpses of boobs and gore. And they weren’t disappointed…

And Tyrion was on fine form tonight. Swaggering into Kings Landing while his sister Cersei fumed smoke from the nostrils and sulked.

It’ll be interesting to see how Tyrion deals with his troublesome double-nephew. Joffrey really is a little scrote, handing out violent punishments like a Milky Bar Kid turned evil. Meanwhile, his beleaguered lady, Sansa (daughter of the recently beheaded Ned, played by Sean “dies in everything” Bean) started to show a bit of Stark mettle, temporarily wiping the snot from her red nose to begin her first foray into the Game.

Her brother, Robb Stark, bearing the shiny new moniker King of The North, was feeling pretty good about life what with those three battle wins. But it wasn’t long before his mother Catelyn helped him regain his usual slightly perplexed face as he was forced to do a spot of politics, something he usually leaves to her.

The news with Jon Snow

But at least his diplomacy is more polished than his half-brother, Jon Snow. All he had to do was stand politely in the corner while his boss chatted up new cast member, Craster. But his girly-boy face immediately put Craster’s back up. He worried about the virtue of his child-brides – as if their virtue weren’t already destroyed by the fact that they’d been forced to marry their father.

What else? Well, we saw that the Dire Wolves now come in jumbo size thanks to the addition of some CGI, the red priestess made her entrance, Stannis grumped his way onto the screen and Petyr Baelish had the willies put up him by Cersei.

Cersei’s smug expression didn’t last long, however. She soon regretted giving her foul-mouthed son a tight smack. And he calmed his nerves by ordering the murder of his father’s bastards, leading to a charming scene where a baby gets slaughtered and carried around by its feet.

So what’s next? Will Stannis develop charm? Will Tyrion find a way to tame the boy king? And will Dany work out what sort of meat to feed to her baby dragons?

Tune in next week!