You are here: Home / Film + TV / Game of Thrones: The winners and losers 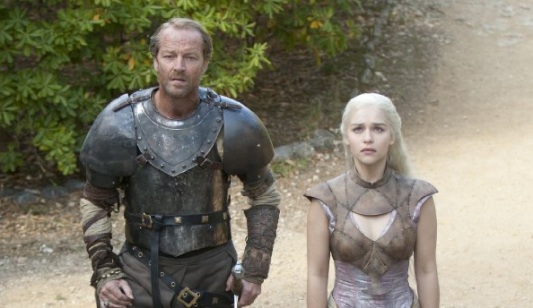 I AM BLOOD OF THE DRAGON!

This week: Valar Morghulis was season finale that couldn’t quite match last week’s episode, but kept me gripped nonetheless.

While the UK has been enjoying a rainy double bank holiday courtesy of her Maj, the many Majesties in Game of Thrones have continued to squabble and work their way through countless innocent serfs’ lives.

Since everyone seems to be getting a little power crazed and in the spirit of Jubilee excitement, I thought it appropriate to hand out season honours – just call me Queen of Dork Adore.

Well, I could talk about Theon with his tar baby antics, or discuss how much of an arse the Kingslayer can be, or what a mean drunk Cersei is, but really we all know that this award belongs to the Milky Bar King himself, Joffrey.

Right from the start, this little inbred has proved himself to be both cruel and cowardly, making courtesans thump each other and keeping Sansa’s eyes in a permanent state of red puffery. Which is why the grand entrance of grandfather Tywin on his big pony was so gratifying.

As was this cathartic bit of footage, created by some kindly soul.

Last season Sansa won this one for me, but her resilience and misery this series has left me with nothing but pity for her. Meanwhile, other annoyances have leapt into the fray, leaving scenes of irritation in their wake.

Daenerys Targaryen was good value last season, but every time she appeared on screen this series, usually cutting off a far more interesting plot thread, I started grinding my teeth. She just about restored some of my faith with the fire magicks at the end, but we really could have done without her for most of the run.

Jon Snow increasingly out-stayed his welcome, coming across as an entitled, grumpy brat who only kept my affection thanks to those sorrowful eyes and that curly hair. He’d better do something more interesting now he’s off to meet the king beyond the Wall.

Littlefinger‘s ability to enter stage left just when you thought you’d got through a scene without him began to pall almost as soon as it had begun. Let’s hope his new land and title makes him less like the Alan Wicker of Westeros (my references are so topical).

Dull as Stannis is, he popped up at the start of the Season and didn’t really get enough air time to get stuck into the storyline. The sudden remorse about killing his brother was a shock to me, and felt a little incongrous after previous episodes of him grumping about a field acting cheesed off with humanity.

Most pitiable character who’s also a bit of a shit

Lots of contenders for this one: Cersei‘s evident horror at her monstrous progeny, Tywin‘s exasperation at the uselessness of everyone around him, The Hound‘s strange little love for Sansa – they all managed to evoke some pity at one point or other.

But Theon Greyjoy was the clear winner. Such an unpleasant little boy in so many ways, but understandably a bit lost. Abandoned as a prisoner to keep his father from harm, unwelcome in his own home and raised by his captives, it’s no wonder he’s a little bit screwy. Alfie Allen somehow managed to leave me feeling sorry for him, especially when Finchy from the Office bashed him over the head after his nice speech.

Brienne and Jaime were good value this season – I look forward to seeing more of them both – and Tyrion and Bron were always good for a chuckle. But the clear winners were Arya and Tywin. Tense, touching and always compelling, these two never out-stayed their welcome. Charles Dance was a class act as usual, and Maisie Williams proved herself to be a star in the making.

There were plenty of creeps in this show. Old Craster who’s been merrily murdering his sons while sleeping with his daughters, the Warlocks from the House of the Undying, and Quaithe, the masked lady from Qarth, were all chilling in their way. But the delicious creepiness of Jaqen H’gar was too good to resist. When his face changed as he said goodbye to Arya I squawked out loud (although I worry that Tom Wlaschiha, the excellent actor playing him, won’t be in it again).

And the Emmy goes to…

Peter Dinklage, of course! Tyrion is clearly the best character in Westeros, and Dinklage’s portrayal is excellent in spite of his chewy English accent. Just thinking about his sad face when Shae told him he was hers makes me feel all teary.

So who were your winners and losers? Do you have prizes you’d like to give – or did I miss out your favourite character? Let me know in the comments – or get in touch on Twitter or Facebook!