You are here: Home / Film + TV / Giles and Sue, Downton Abbey finale and Ancient Worlds: What We’ve Been Watching 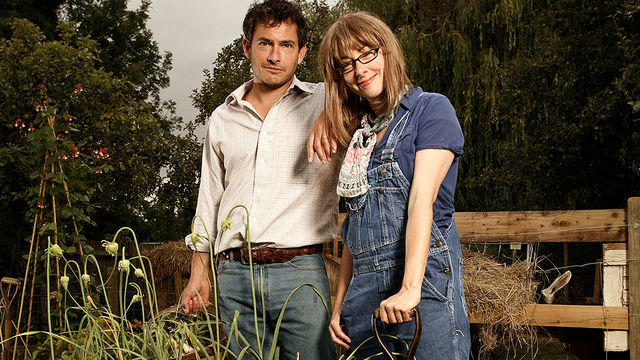 A more slimline WWBW this week, in recognition of the fact that, well, telly’s been a bit rubbish over the last seven days. A few series have come to an end, and a couple of big ones started the week before, so we’ve been pretty much in a holding week. Still, you can always rely on Giles Coren and Sue Perkins to be witty and charming company…

Giles and Sue made an unlikely pair when they first started exploring the culinary tastes of the Victorians and the Elizabethans for Supersizers Go…, but their rapport has grown to the point that their relationship was the main reason for tuning into Giles and Sue Live The Good Life this week. The premise is slight, really — what’s it like to live the self-sufficient life that Tom and Barbara left the ‘rat race’ (as Sue and Giles continually put it) for in the 70s sitcom The Good Life? I say slight because they were completely open about the fact that they were playing at it rather than doing it for real; in which case, what’s the point?

Well, for rather fun telly, I suppose, which is what this was. The dynamic is set up so that Giles is the urban sophisticate who refuses to get his hands dirty while Sue is the practical one who gets stuck in, and real or not, it works well, especially when there are chickens to be grabbed and put to bed for that night. They may try to make this series a social commentary on the difference in aspirations between the middle classes then (golf and dinner parties) and now (a place in the country and grow your own veg) but in the end, you just want to see Giles doing more flapping than the chucks and Sue milking a goat straight into her mouth… fluffy, inconsequential but ultimately entertaining stuff.

I’m a bit of a history nerd, so I was fully expecting Ancient Worlds — about the birth of civilisation in Eastern Europe and beyond — to be completely up my street, but even I have to admit that this was just a little dull. One of the main problems is the series’ presenter, Richard Miles, who is terribly serious, striding earnestly around dusty ruins as he talks about irrigation methods and class structures.

And Miles isn’t helped by the fact that this simply isn’t a very visual series: artefacts are referred to in passing but far from central, he doesn’t speak to any other experts, and while Miles bravely treks to the likes of southern Iraq, there’s usually little left of the cities he’s describing. It is, essentially, a lecture. Very well researched and incredibly informative but a lecture nonetheless…

Up with Downton Abbey

And finally, a few words on Downton Abbey, conversations about which – luckily for me – are still continuing despite it coming to an end a couple of Sundays ago. In my first Downton Abbey review, I said that it was deathly slow, but that I would stick with it in the hope of it picking up – and I’m very glad I did. I particularly loved the fact that the ‘good’ characters – in particular Matthew Crawley (the fab Dan Stevens) and the maid Anna (the equally fab Joanne Frogatt) – were just as interesting as the baddies, and equal precedence was given to storylines above and below stairs. A bit melodramtic at times, but none the worse for that, it could also be genuinely funny, and there was some beautifully tender, charming scenes between Anna and Bates. Roll on Series Two…

Next week: Sky Arts brings together a stellar cast including Julian Barratt and Steve Coogan for Chekhov: Comedy Shorts and it’s Children In Need time again.

Read all of Anna’s What We’ve Been Watching colums