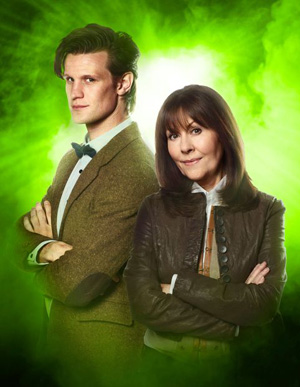 So, I was scheduled to do a post in advance of Saturday’s new Doctor Who series. I was going to be excited about upcoming reviews, describe my ludicrously high expectations, all the stuff you might expect.

But then, last night, we heard that Elisabeth Sladen, aka Sarah Jane Smith of both Who and Sarah Jane Adventures, had passed away, a piece of news so sad that it overshadowed the prospect of a new series of time-travel banter.

I am a new generation Doctor Who fan, didn’t start watching until the Christopher Ecclestone relaunch in the mid-2000s and I’ve never gone back to the old stuff. When they re-introduced Elisabeth Sladen’s Sarah Jane character in the excellent David Tennant episode School Reunion, I had no nostalgic attachment to her.

So it’s a testament to her effortless charm that I fell in love with the character anyway, despite being a cynical internet review-bot. Not to mention, of course, the millions of children (not to mention me) who watched Sarah Jane Adventures and made it the most successful show on CBBC, even though they most likely didn’t watch her in the seventies either.

Of course, I never knew or met Ms Sladen personally, but fans and colleagues have had nothing but good things to say about her, not only after yesterday’s sad news but long before it as well. Our sympathies and thoughts are with her friends and family.

And I’m sure my enthusiastic preview of the upcoming Doctor Who series will follow in the coming days, but in the meantime, I’m off to rewatch School Reunion. I encourage you all to do something similar.