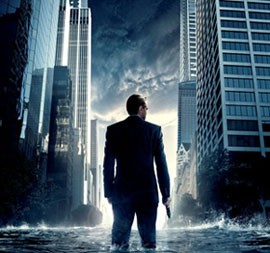 There are enough positive reviews of Inception on the internet for me to wallpaper my house, without having to re-use a single one. By the time I finally saw this universally acclaimed modern classic, I somewhat wanted to hate it. I thought it might make this post more interesting for the reader, the writer, perhaps even God himself.

Alas, it didn’t work. I thought Memento was a triumph of blows to the head over substance, but am still forced to admit that Inception is excellent.

Probably Christopher Nolan’s finest cinematic hour, certainly the one I have the least misgivings about.

It might not be quite as fantastically stunning as some of the more rabid reviews want you to think, but it’s the most innovate summer explosionfest I’ve seen since The Matrix, and holds the attention for the whole of its 150 minutes. A lot of the middle is thinly disguised lectures on the rules of Nolan’s dream-niverse, so that’s more surprising than it sounds.

And considering the intricacy of the plot, I kept up with surprising ease. With a less accomplished director, you’d have to see this film twice to fully understand it, then buy the DVD as well. To be honest, that’s probably what they want. Admittedly, the story-telling does get unclear in a few sequences towards the end, due to what I’ll call “white cat in a snowstorm” syndrome.

In cast terms, there’s no obvious weak links. It pivots around the goateed fulcrum of Leonardo DiCaprio, but everyone else is good enough to take their moments when the spotlight turns; Tom Hardy, who I hadn’t seen before, was particularly good in his scenes. Once again, a couple of Batman actors have followed Nolan onto the project: Michael Caine and Cillian Murphy do the honours.

If you want more instant gratification from your blockbusters, the quiet patch in the middle may be a little ponderous for you, but the elaborate action in the final hour should make up for it, unless you’re truly hyperactive.

To be honest, my only other thought after leaving the cinema was that it will be a shame to see Nolan return to the Batman franchise if Inception is what he can do when left to his own devices. Certainly a likely pick for adult fantasy/sci-fi film of the year.