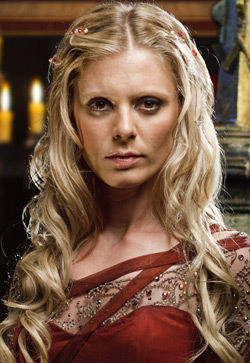 It’s here! After the most sustained reviewing campaign I’ve yet mounted on Dork Adore, we have the beginning of Merlin’s finale two-parter. Which means, after lurking for the entire year, Emilia Fox’s Morgause and Evil Morgana’s smirk have their try at taking over Camelot.

Of course, this isn’t the climax, that’s next week. So the job of this first part is to drive the stakes as high as possible, and start paying off all those subplots. Is the excitement exciting enough?

Lord Fear And The Loose Ends

Well, if we measure the success of a finale in terms of how many callbacks to previous episodes they fit in, this certainly tries its best. We’ve got yet another return of Gwaine, not to mention Gwen’s brother from “The Castle Of Fyrien”, and a quick cameo from the mysterious water that Merlin found in “The Eye Of The Phoenix”.

Inevitably, there’s a return to the big Morgana reveal from “The Crystal Caves”. But before these long-awaited moments, we have half an episode of Merlin, Arthur and Gwaine hanging around in forests, exchanging overly earnest Fantasy Dialogue with slave traders. When the self-aware humour is removed, this show can remind me worryingly of Knightmare.

Oh, and a recurring character is killed. I won’t spoil it, but it’s someone who never did much and won’t be missed.

Once we finally get going, it’s Merlin, a wounded Prince Arthur and a range of guest stars heading back to Camelot to find that the worst has happened. Well, the news slowly unfolds in a rather unsettling way. And the final scene, especially the reaction shots of Uther, Arthur and Merlin, conveys the drama well.

Despite a slow start, this episode did everything it needed to; we are now more than ready for a big showdown next week. In terms of predictions for the ending, the title “The Coming Of Arthur” suggests both dubious fan-fiction and the prospect of the Prince taking over as King, but I suspect that’s what they want us to think.

My actual prediction is that Morgana hesitates at the crucial moment, because she’s still a good person deep down (despite having tried to kill every major character at least twice this year), and Merlin somehow defeats her using his magic water sample. But I’m usually wrong about these things.

In the meantime, you can see the episode on iPlayer, and there’s also a behind-the-scenes blog by one of the co-producers on the BBC site. And then you can let us know your predictions for the glorious ending.