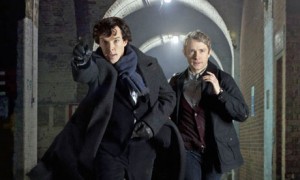 I love Sherlock Holmes. Have done ever since I was a kid. I’ve read all the original stories many times over, dragged my mum and dad to the Young Sherlock Holmes movie (twice), and then bought the audiobook to play on a loop in the car (sorry mum).

A few years ago I managed to convince a friend of mine that a Sherlockian walking tour of central London, led by costumed obsessives, would be a good way for two grown men to spend a sunny Summer’s afternoon. Somehow that person still talks to me.

Needless to say, my fingers have been burnt many times by the diluted dregs of the Holmes industry. It’s my own fault for being tempted by tosh like ‘Holmes Vs Zombies’, ‘Sherlock Holmes Vs Dracula’, and the western-themed ‘Holmes on the Range’ (I’m not making any of this up), but that doesn’t stop it feeling like someone’s punching the corpse of a close relative every time another of these abominations pops up.

If you’ve ever seen that episode of Star Trek: The Next Generation where they go a bit Holodeck crazy and start sporting deer hunter caps, then you have some idea of my pain.

Recently, however, the Holmes canon seems to have garnered a bit more respect by those who choose to plunder its riches, and new adaptations have appeared that wouldn’t necessarily make Conan Doyle rise from his grave, grab a shotgun and go on a zombie rampage across Hollywood.

Despite the involvement of Lord Guy of Ritchie and Jude Law, the recent blockbuster Sherlock movie was an enjoyable, if slightly forgettable, romp; and the series of Young Sherlock books by Andrew Lane aimed at teenagers got off to a good start with the bee-obsessed Death Cloud.

Next up, of course, is the “thrilling, fast-paced update of Arthur Conan Doyle’s classic detective, set in present-day London”, brought to us by Doctor Who alumni Steven Moffat and Mark Gatiss.

The first episode airs this Sunday, so drawing on my vast expertise (I can quote you large sections of Basil The Great Mouse Detective) I’ve drawn up a few guidelines as to what I think may make or break this latest Holmes outing…

1. Make Holmes a complete git
This is key. It’s one half of the S.H. formula that keeps idiots like me coming back for more. Sherlock needs to be 99% wanker, otherwise everything else falls apart.

Jeremy Brett nailed the gitiness of Holmes in his masterly (and some would say, definitive) portrayal of Sherlock in the Granada TV series The Adventures of Sherlock Holmes. Obsessive, depressive, manic, conceited, frustrating, rude and… a complete git. From Morse, right through to Batman (with House being the most recent example, even the name is a giveaway) it’s a formula that’s been copied a thousand times since Doyle chanced upon it: a sullen, addicted and unpredictable detective counterbalanced by his straight-man sidekick. Talking of which…. 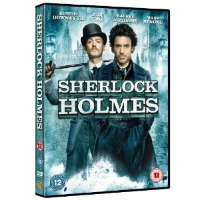 2. Don’t make Watson a sap
This is arguably the biggest mistake most Holmes adaptors make. They assume that the balance to Holmes’ gitiness should be an equal and opposite sappiness embodied by Watson. And with that presumption the magical formula falls apart. Watson is our narrator, it’s through his eyes (or blog in this most recent adaptation) that we view Holmes, and it’s through that filter that we discover the 1% of him that isn’t an enormous tool. John Watson is a soldier, fresh from Afghanistan, who isn’t about to start taking orders from some junkie in a flappy hat.

If Watson panders to Holmes then so do we, and then we just end up resenting them both. It’s like eavesdropping on an abusive relationship, only with more smog and top hats. Nobody wants to watch that. But as soon as Watson proves himself Holmes’ equal (his main talent being that he can function as a normal human being) then we’re off and running.

3. Don’t try and hammer home the modernity
I’ll be honest, the fact that Watson keeps a blog in this series makes me a little scared. It’s the equivalent of a big, neon sign that reads ‘LOOK HOW MODERN WE’RE BEING… LOL!’ and it smacks a little of laziness. Today’s London is murky enough, dangerous enough, and beautiful enough (in a murky, dangerous way) to transplant Holmes into without losing any of the key elements that made it a success at the back end of the 18th Century.

Holmes has no need for his version of a ‘sonic screwdriver’, his main weapon is his brain, so to try and supplement that with the Sherlockian equivalent of the Batcave would be a huge misstep. Gadgets and gizmos are normally a smokescreen under which to hide a gap in the plot or a lack of character depth, so if I see Benedict Cumberbatch reach for an iPad then I’ll be reaching for my remote. 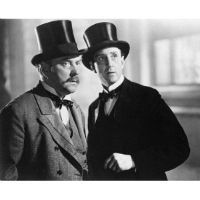 4. Don’t pander to the canon, but don’t disrespect it either
I admit it, I’m being a pain here, but what can I say… I’m a demanding fan. If the Holmes-Watson relationship is a precarious tightrope, then the respect-renewal balance is a precarious tightrope suspended over a pit of ravenous lions, and the lions are all rabid Holmes geeks who know the mythos backwards and will write four-page letters to the BBC if they spot anything that contradicts the canon.

Okay, I stretched that analogy a little too far, but you get the idea: any new incarnation of Holmes has to bring in new ideas while feeding off what’s gone before. Think of how Alan Moore’s League of Extraordinary Gentlemen (the comics, not the film) took those stalwarts of Victorian literature and breathed new life into them while, at the same time, made you want to go back and read the source material. That’s what Moffat and Gatiss should be aiming for here.

5. Keep it real
Sherlock Holmes is not Doctor Who, of that we can be certain (as for who would win in a fight, we can save that conversation for the pub). While the Doctor’s appeal lies in the fantastical and the bizarre, the world’s greatest consulting detective is grounded very much in reality. It’s Sherlock’s humanity and his vulnerability that make us see past the git facade, and also lets us connect with the stories. Although themes of morality, social inequality, and even (whisper it) romance, slip into the Holmes narrative from time to time, the real drive is always Holmes’ thirst for a good, old-fashioned bit of justice. That’s an idea that everyone can get behind, and with the success of films like Christopher Nolan’s ultra-gritty Batman, the brains behind Sherlock 2010 might do well to keep their eponymous hero as grounded as possible (this is all a roundabout way of saying ‘no aliens please’).

It all got a bit serious there for a second, so let me finish on a crude, juvenile note. In the original Holmes tales Conan Doyle has a habit of using ‘ejaculated’ as a synonym for ‘said’. For example: “‘But what is there left to know, Holmes?’ Watson ejaculated.” This, as I’m sure you’ll agree, is hilarious. If they can somehow work unintentional ejaculation into this new TV adaptation then they’ll be laughing.﻿