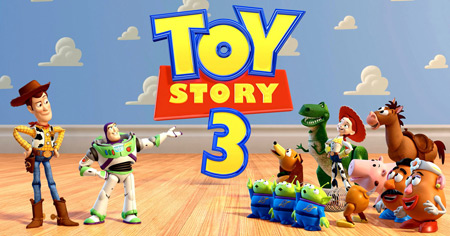 After eleven years, Toy Story returns! Of course, the original films were fantastic, genuine modern classics. Not only that, they launched the current era of animated movies, by proving that computer-generated characters had feelings too. So a little bit of pressure existed on Pixar for this one.

Fortunately, it is great. I mean, it really is. Much like that Inception review the other week, I’d have to really desire notoriety to give Toy Story 3 a bad write-up. It joins a relatively elite club of second sequels that have kept up the quality, especially in recent years when “third film” has too often been synonymous with “hernia-like bolted on growth”.

Toying with our emotions

Since its release, Toy Story 3 has swiftly gained a reputation first for being excellent, and second for being very sad. As Doctor Who’s David Tennant years proved, one way for a children’s story to appeal to adults is the causing of an emotional breakdown. It teeters on the edge of being mawkish, but this is a Disney film after all. I’m not going to spoil anything, but it might be wise to see this film in 3D so the fake plastic sunglasses can hide your tears.

Since I mention it, I did see this film in 3D. I’m aware there is a rising backlash against it, annoyingly timed to clash with my piece on 3D television, but it doesn’t intrude on the experience here and at times looks very impressive indeed. In my limited experience, 3D looks a little better on these animated movies than live action. Sorry Avatar, I know you spent all that money.

Part of a limited series

Despite the intervening decade-plus, what’s most impressive is the sense that Toy Story just hasn’t skipped a beat. The characters are exactly as we remember from our idyllic childhoods, although time has passed for them as it has for us. But even if you didn’t re-watch the first two in preparation like I did, I think it would be all too easy to slip back into it.

I know I’ve now gushed away merrily for 300+ words, but a large part of me still hopes that this is the end. Because this is an almost perfect trilogy and I’d hate to see it ruined. But, cleverly, the ending of this film could serve as either a final conclusion or a springboard for a fourth. I suppose we’ll have to wait and see.