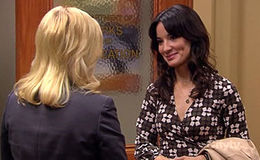 Last week, we were introduced to the… well, colourful staff at Pawnee, Indiana’s parks and recreation department. I took a shine to Ron Swanson, learned that complaints are just “people caring loudly at you” and that the name Knopfe is just another way of messing with my head.

This time on Parks and Recreation, a reporter comes by to interview Leslie about the quarry pit and the plans to build a park there. Needless to say, Stuff Happens.

Spoilers afoot, so get thee to iPlayer if you (shame on you!) missed out on this episode.

Originally scheduled to be the second episode in the running order, The Reporter eventually switched places with this Wednesday’s first episode, Canvassing. But BBC 4 has kindly reinstated the order of business and it was through this that we got a glimpse at how not to handle a reporter coming to interview you.

Said reporter (Shauna Malwae-Tweep, played by comedian Alison Becker) is invited in by Leslie to do a report on the plans to make the old pit behind Ann and Andy’s house into a park. The initial interview goes horribly wrong and Leslie turns to Mark (who she once had sex with, remember? Well, she’s not making us forget it.) to help out with the reporter.

He gladly helps out* (*does the nasty with her) and a second interview is arranged, but again goes horribly wrong as Leslie’s mounting jealously at discovering Mark and Shauna slept together turns her into “a dork”, as Mark later says.

A third interview starts off right, but then goes wrong again when Shauna reads Leslie some choice quotes from other interviewees about the park project (to sum it up, seeing a unicorn/leprechaun/talking monkey would be more likely than this park getting made). When she adds that it was Mark who told her this, Leslie is fuming.

Eventually, after much grovelling from Mark and Ann, the article gets published and Leslie refuses to lose hope in her project.

Oh yeah, and there’s a b plot involving Tom, Ron and April and online Scrabble.

Last time, I asked myself the question if Leslie would become a more developed character in the following episodes. The focus seems to be on the fact that she’s both a bit of a ditz and still has feelings for Mark. This is very much still so in episode two. The other characters aren’t given the screen time they need to be more developed, and again, Ron Swanson is underused.

Two episodes in and there appears to be a bit more evolution in the series. But Parks and Rec is very much trying to find its feet, and at times this appears to be done on thin ice. But I still have hope for Leslie and the parks department. After all, how can you be mad at someone so annoyingly optimistic as Leslie Knopfe? 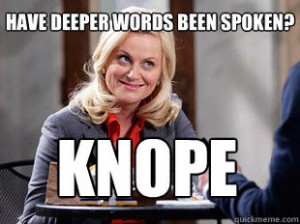