You are here: Home / Featured / What to do until The Walking Dead returns 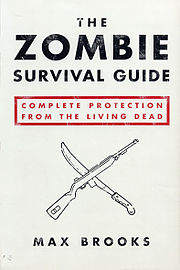 Now that The Walking Dead Season 2 has come to an explosive end we have a long and arduous walker-free summer ahead of us. But! fear not loyal readers, help is here in the form of this handy guide of Zombie-centric things to do that will keep your brrraaaaaaaiiiiiins sufficiently filled with enough reanimated fun to keep you satisfied until Rick Grimes and co are back on our screens.

Read anything by Max Brooks

Few novels have had as big an impact on a literary sub-genre than those written by American Max Brooks (played here by Wales manager Chris Coleman). His first book The Zombie Survival Guide is a scarily realistic, yet totally fictional manual about how to survive the Zompocalypse.

Brooks leaves no stone unturned. He approaches the subject with such a serious and credible tone that should the undead ever  rise from the grave and start walking the earth this book would no doubt become government issue. In it he addresses such things as weapon effectiveness, how best to repopulate and re-educate society, and even details of dietary and exercise regimes to get you in the best zombie-slaying state possible.

World War Z: An oral History to the Zombie War is a follow up to the Survival Guide and expands on the eyewitness and “historical” accounts that make up much of his previous book. World War Z is written as a series of anecdotal accounts with survivors and witnesses, conducted by an investigative journalist for the U.N. as part of their official report on the global catastrophe.

Again Brooks’ attention to detail is unnerving: he creates a series of events so authentic that this could be mistaken for a genuine historical chronicle. A film of the book starring Brad Pitt is currently in production. It wrapped filming in Glasgow late last summer. 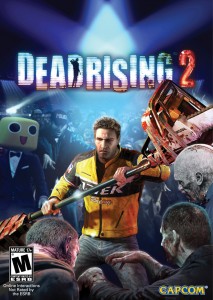 There’s a plethora of video games out there that allow you to slaughter relentless hoards of the undead from the comfort of your living room, free of all that fear of contamination and flying brain matter malarkey.

Ok, so not all of them are triple-A experiences, but they are not without their charm – and they certainly help to fill the zombie-shaped void in my life.

Failing that why not pick up Telltale Game’s Walking Dead adventure game next week. I know I will be.

Experience days are proving ever-more popular, so it was surely only a matter of time before somebody started hosting a zombie survival course.

Well, now there are a few companies offering experience days that offer full weapons training and mission-based activities for a princely sum £70 (approx). It’s a brilliant alternative to paintballing and is something I’m sure will only become more popular as the current zombification fad picks up momentum. 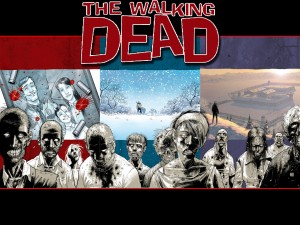 If you’re missing the show that badly and you haven’t read the source material yet – seriously what are you doing?!This is pretty simple stuff people.

Robert Kirkman’s comic has recently hit the 100 issue mark and shows no signs of stopping soon. The comics are different enough from the live action version to still offer up massive shocks, and the show’s creators have said on a number of occasions that the TV series is, to an extent, a separate animal to the comics and will deviate where possible to keep fans guessing and glued to the screens.

Personally I was never really a huge fan of comics or graphic novels, but the Walking Dead changed that and has at times had me literally sitting up mouth agape with my hands on my head!

It’s seriously one of the most gripping tales I’ve ever read; and believe you me – things are about to get real nasty in the third series, and I guarantee that many things will be omitted! Why not do yourself a favour and read the full original story and find out why David Morrissey is so excited to be joining the show.

Read more on The Walking Dead on Dork Adore