You are here: Home / Featured / Five 16bit classics you should be playing

Always dreamed of having a Super Nintendo or Sega Megadrive in your pocket? Well that fantasy is now a reality thanks to the wonders of modern technology. Here are my top five 16-bit classics that you should download to your smart phone immediately. 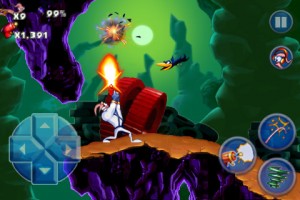 The game itself was a stylish and humorous action/platform adventure which tasked the once simple earthworm with rescuing Princess What’s-Her-Name from the Evil Queen Pulsating, Bloated, Festering, Sweaty, Pus-filled, Malformed, Slug-for-a-Butt (“Queen Slug-for-a-Butt” for short). Along the way you battle other villains (such as Psy-Crow and Professor Monkey-For-A-Head), whip a puppy with a temper problem, ride a hamster, fly though asteroid fields, bungee jump, and even catapult a cow…

How can I recommend 16-bit games and ignore Sonic The Hedghog?! He’s an icon – practically an ambassador for the ‘90s and a member of console gaming’s royalty. Chances are if you owned a Sega Megadrive the spritely blue hedgehog was a large reason why. Twenty years on since Sonic the Hedgehog 2 first arrived it still offers up a smooth rollercoaster of a platform game that thrills and challenges with its brilliantly designed levels that perfectly show off the lightning quick hedgehog’s strengths. Significant changes from the original see the annoying Chaos Emerald mini games replaced instead with the far more fun 3D half pipe special stages, and also the arrival of Sonic’s sidekick Miles “Tails” Prower.

Surely everybody has played at least one game of Worms in their time? The objective is simple: use a colourful arsenal of weapons to annihilate all your opponents and be the last worm standing. Worms was a phenomenon when it was released in 1995. Worms 2: Armageddon is a more recent release that combines all the best aspects of the original few releases and wraps it all up in a nice convenient package for the modern gamer. The mobile version has all the customisable options you’d expect (so you can still name you team of four after your favourite films/tv shows) and boasts both four player support over either Wi-Fi or local Bluetooth. Enough said. 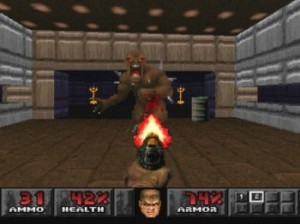 id Software invented the modern first-person shooter when they released Wolfenstein 3D in the early 1990s. Doom was the company’s next stab at the genre and to this day it remains an absolute classic and just as playable as it was when it first appeared. The plot is a simple one – scientists on Mars have inadvertently opened a gateway to hell (if I had a penny for every time I’ve done that!) and it’s up to you to clean up the mess. Thankfully you have an almost pornographic list of weapons at your disposal to do this, including shotguns, miniguns, chainsaws, and of course the BFG 9000 (and no, it doesn’t stand for Big Friendly Giant).

Controls on your smart phone may at first seem weird, but thanks to a generous amount of customisable options, it won’t be long before you’ve found a layout that works for you. Once that’s sorted a lengthy and gruelling campaign of survival against the demonic hordes awaits. There are plenty of FPSs on iOS and Android, but Doom: Classic remains the best. 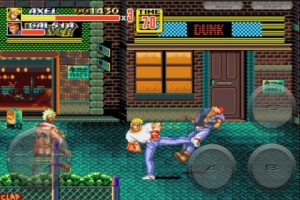 Side scrolling beat ‘em ups are a forgotten genre nowadays, but during the ‘90s they were a staple part of the yearly release calendar. Typically, after picking one of four playable characters you punch, kick, headbutt, and reverse pile-driver your way through waves of identical thugs on your way to rescuing your kidnapped girlfriend/partner/kitten [delete as appropriate]: Streets Of Rage 2 was the king of them all.

Not only was the game one of the more attractive visually, but it featured what is quite possibly one of the best original video game soundtracks ever.

So what games from yesteryear would you love to have in your palm? Let us know below.