You are here: Home / Featured / We’ve been playing with the iPhone 5! 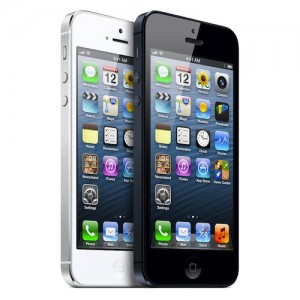 Five years ago this year, late Apple CEO Steve Jobs took to the stage in San Francisco to unveil a device that would revolutionise the mobile computing industry over night.

People were no longer happy with their cheap and cheerful Nokia “dumb”-phones or their school calculator looking BlackBerries and millions flocked to Apple Stores on launch day to snap up the Cupertino company’s latest “must-have” product.

Every year since then, Apple has refined and improved the iPhone in various ways. 2008’s iPhone 3G added a new design and faster data speeds. iPhone 3GS had an improved camera and faster processor. iPhone 4 had an all new glass and steel design and much improved internals, while last year’s iPhone 4S added an even better camera and Siri.

The Sixth iPhone is here!

This year was no exception with the eagerly anticipated announcement of the iPhone 5. The numerically challenged sixth iPhone adds even faster internals courtesy of Apple’s A6 processor, a bigger display for the first time in five years and an improved design.

But is that enough with growing competition from the Android and Windows Phone camps?

The iPhone 5 styling isn’t a radical departure from the iPhone 4 and 4S, but the differences are immediately noticeable when you get up close.

The steel-band-sandwich era is over, with the iPhone 5 sporting a new aluminium enclosure that is 18% thinner and 20% lighter than the previous generation. The iPhone 4S will definitely feel heavier and chunkier than you remember once you hold this thing.

On the front Apple has added a 4-inch Retina display which won’t impress those of you sporting 5-inch mega-phones like the Samsung Galaxy Note, but has the advantage of still allowing you to type using one hand if that’s your thing.

On the bottom of the device you’ll notice the headset jack has been moved from the top and is nestled next to Apple’s new Lightning connector port. Gone is the old 30-Pin Dock Connector we all knew and hated. The new Lightning connector is MUCH smaller and is also reversible: you won’t have to fumble around on your bedside table in the dark trying to plug your phone in any more.

Like previous iPhones, the iPhone 5 is available in black or white.

The changes Apple made to the iPhone 5 aren’t just skin deep. The A6 processor blows every other iOS device (including this year’s iPad) out of the water. Pinching, tapping & scrolling all register immediately with nary a stutter in sight. After a couple of weeks you’ll wonder how you got by before.

The iPhone 5 also has an LTE (4G) radio inside which allows much faster data speeds on certain networks. Here in the UK we don’t have a lot of options. EE, the merger between Orange and T-Mobile, will be launching their 4G network in a few cities at the end of the month with the other providers launching their service at an unspecified time in the future.

At first glance, the iPhone 5 camera looks the same as last year’s model but it sports much improved low-light skills, better noise reduction and a panorama mode. The 8-megapixel snapper can also shoot 1080p video with image stabilisation and face detection. The front camera has been upgraded to enable 720p video for FaceTime video calls.

Battery life on the new iPhone 5

Apple claims that the iPhone 5 will get roughly the same battery life as the 4S. Impressive when you take into account the performance improvements. In my experience, I’ve found that I easily get through the day with heavy usage (the same couldn’t be said for my previous iPhone 4).

The new iPhone 5 is an excellent upgrade from the previous generations, but it’s still an iPhone.

Current iPhone owners will love it (you probably already have your credit card in hand) but if you haven’t been tempted to switch from another smartphone in the past couple of years, I can’t see enough new here to pull you over.

There are a lot of excellent phones out there now. The landscape has changed since the launch of the original iPhone, and the decision to buy one isn’t black or white any more. You might want a bigger display, a smaller display, a keyboard or a cheaper phone, and there are plenty of devices out there for you.

But in my opinion the iPhone 5 is the best smartphone available today. Its design, build quality and software are unmatched by any device on the market. Maybe it’ll stay that way. At least until next year.