You are here: Home / Gadgetry / The GREE Platform – Dork Preview 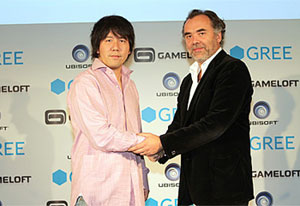 Yesterday, I was Eurostarred to Paris by a Japanese internet company called GREE to attend a big press conference. They were announcing their partnership with Ubisoft and Gameloft to move into the western social gaming market, where they hoped to repeat their massive success in Japan.

So, if GREE are so huge, and able to whisk me off to Paris in a dramatic (and curiously romantic) gesture, why haven’t you heard of them? And is all that about to change?

GREE were founded eight years ago in 2004 by Yoshikazu Tanaka, who developed the GREE social network in his spare time, picked up ten thousand users inside a month and established a company around it, presumably because his inbox was out of control.

Tanaka is now the world’s second youngest self-made billionaire, behind a certain Mark Zuckerberg, proving that we should all stop robbing banks and start making websites in our bedrooms. With the network in place, GREE moved on to make social games.

Imagine games such as Farmville and Words With Friends, only those are run by companies like Zynga using Facebook as a platform, whereas GREE owns both the games and the platform they run on. And when smartphones hit Japan, GREE games took off as apps too.

And now, with this announcement, GREE wants to bring their success to us.

So, How Does This Affect Me?

We won’t be expected to join the GREE social network, which is a relief, as I have enough social media sites to check already. But the borderless GREE platform, launching in the second quarter of 2012, will form the basis for upcoming mobile titles on both iOS and Android.

This is where the partnership with Ubisoft and Gameloft comes in, as the first outside companies announced to work on the platform. Gameloft have announced Gang Domination (working title), a gang-based social card game, whilst Ubisoft are working on a mobile game spinning off from their successful Assassin’s Creed series.

There was no announcement yet of original GREE games in western app stores, but even so, this is a huge company who seem serious about making inroads into our marketplace. You might see their logo on your smartphone sooner than you’d think.

Pictured above: Yoshikazu Tanaka of GREE and Geoffroy Sardin of Ubisoft