You are here: Home / Kids / Geek reads: The Spook’s series by Joseph Delaney 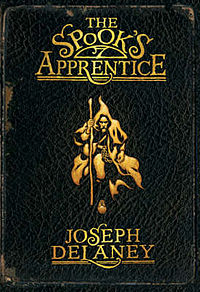 The older, nicer covers of the Spook's series

In 1612 the Pendle Witch trials became the most famous of their day. One of the few trials to be fully documented, there were subsequent books from the court records, as well as novelisations from Dickens’ (at the time) equally famous contemporary William Harrison Ainsworth.

The witches themselves do seem to have been pretty sure they were actually witches, with the main family living in the excellently named “Malkin Tower” (a house fitting Malkin Tower’s description was unearthed recently, complete with a mummified cat in the walls).

Although this exact story isn’t featured in the Spooks series, some of the names – Mouldheel, Malkin and Pendle – feature heavily. And the atmosphere of lawlessness and dark magic that was rife in the county of Lancashire during the Reformation most certainly takes centre stage.

This is a world where “Spooks” take care of the county’s horrors, protecting locals from Boggarts, Witches and the dark forces of the big man himself, the Fiend.

Tom Ward, a seventh son of a seventh son (which provides him with a natural defence against the Dark), becomes the Spook’s apprentice. The Wardstone Chronicles follow his story, along with Alice, daughter of a local witch, who is trying to stay in the Light.

The stories are so excellently creepy that the warning at the start “Do not read after dark” is actually pretty good advice. I imagine children will be petrified by these stories – I know I am! There are plenty of witches, boggarts, and – worse – dead witches (who crawl through the leaves, covered in maggots, in search of blood).

This horror is brilliantly tempered by the matter-of-fact northern narration from Tom Ward, and the Spook’s no-nonsense training, creating something that feels more like a straight record of Lancashire’s history rather than a fantasy tale.

The characters are great, especially Alice and the malevolent and yet strangely likeable Grimalkin, the witch assassin of the Malkin clan.

But what I really love is the fact that this series uses good old storytelling to create atmosphere and suspense. The thing that annoyed me about the Harry Potter series was how often the plot turned on either Dumbledore or Harry with-holding information from each other until the very end.

By contrast, Tom always fesses up to his master, and so we are always dealing with the consequences, not waiting for the inevitable denouement. This creates a story that is always chilling and gripping and which feels like it could really happen.

A film has been on the cards for a while now, with Tim Burton originally tipped to direct (although his name hasn’t been mentioned lately). I hope the American version maintains that earthy, Lancashire realism, even if the name gets changed to match the American book titles (Book one is called “The Last Apprentice”).

You can download a free story from the Spook’s Witches book: Grimalkin’s Tale

Trailer for I Am Grimalkin, the latest in the Spook’s series:

Check out all the Spook’s Books on Amazon.