You are here: Home / Kids / They Might Be Giants inspired Blue Canary Night Light 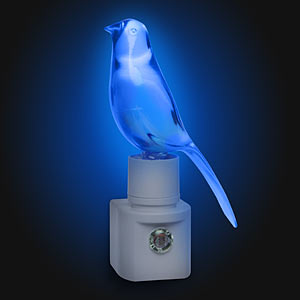 They Might be Giants are the band of choice for those of a geek bent – and have been since their formation back in 1982.

Anybody who releases albums such as ‘Here Comes Science‘, featuring songs about space, physics and computer-assisted design, is onto a winner in my book.

However, most people probably know them for their biggest hit, ‘Birdhouse in Your Soul’, an abstract tale about a blue canary-shaped night light who reckons he would have made a rubbish lighthouse.

I told you they were geeky.

In retrospect it seems crazy that nobody thought to produce a canary nightlight to cash in on the popularity of the song.

But worry no more! 21 years after the song was released, Think Geek has stepped up the plate: you can finally have your very own Blue Canary Night Light for just $12.99.

I always think of the night lights as quite an American thing (and as Think Geek is a US-based site you probably will need an adapter), but as a child I was definitely scared of the dark* so I can only see them as a good thing.

Although this is a suitable night light for any child, the real beauty surely lies in enabling parents to have a bit of a cool indie reference in their kid’s bedroom. To be honest I might just have to buy one for myself…but because I love TMBG, not because I’m still afraid of the dark.

*I’m pretty sure this fear started after mum let me watch the X-Files. Early sci-fi induction scarred me for life.