You are here: Home / Featured / Leila Johnston: How to make a spoof Fighting Fantasy book

Leila Johnston, creator of  Worry Friends and friend of Dork Adore asked if we’d help pimp out her latest book. Instead, we told her to write us a few words about Fighting Fantasy novels and her other influences, and she duly obliged…

My new book, Enemy of Chaos, came out last month. It’s being billed as a spoof Fighting Fantasy book for the nostalgia generation, and while Fighting Fantasy is certainly a significant influence, I couldn’t resist the opportunity to pile in a load of my other fascinations in too.

So here are some of the things so forcefully present in my thoughts and attitudes that they made it into the book in some form. 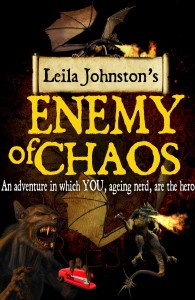 I had a strong interest in the Post Office and the Royal Mail long before it was topical, and as a result my book contains a prescient section about postmen not doing their jobs..

I’m interested in what postmen do, how they interact, how invisible they are in the context of our daily lives. I’m interested in what they wear, their little post-prams, the subterranean London mail network, the fastidiousness required, its fundamental surreality, and just the old-fashionedness of it all.

I like to imagine the work attracts a certain kind of consecutive-number obsessed person, or sort of shy extraverts – people who are interested in almost encountering other people all the time, but not quite managing it.

2. Adventure books of my past

For many people it started with Fighting Fantasy, but not me. From about the age of seven, I would get Choose Your Own Adventure books out of the library along with a book about ponies and something trying to encourage me to pursue a career in hairdressing, take them home, devour them, and try to write my own. 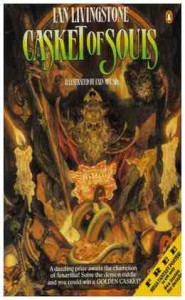 It wasn’t just the (excellent) CYO Adventure series, although that was probably the gateway drug. I had interactive Doctor Who adventures that were much darker and more hard-going, and one I was mad for called Casket of Souls (1987), written by FF’s Ian Livingstone and illustrated to eye-wateringly impressive effect by Iain McCaig (and now selling on Amazon for $155) .

There was no story as such; the full-page, full-colour pictures were everything in this really neat puzzle book idea – I remember all the colour plates, each one contained a different clue. And best of all, it was HARD. Really hard. And the pictures were shocking in a way, a certain amount of nude nymphs and skulls and so on, but mainly just INSANELY exciting esoteric fantasy scenarios.

Puzzles about astronomy with thrones and glimpses of unthinkable worlds through the window, with cups of blood and glittering bones and of course the eponymous Casket of Souls itself, which was a REAL THING that could be won! Made of gold! I didn’t solve the puzzles or win the casket, but it sure made me want to do a gamebook.

It started with Ceefax, I should think. Like most 20-somethings my mind was first officially blown by Bamber Boozle’s witch-like knowledge of the actions of my remote control. That cheeky pixel-face seemed to know… too much. The quizzes were difficult too. Then, shortly before the internet was common knowledge, I remember coding for Prestel and learning about all that amazing Viewdata stuff in IT lessons at school. As with Teletext, the idea you could essentially phone someone up through your telly blew my mind all over again.

The astonishingness of it still hasn’t quite worn off if I’m honest. I have a lot of happy, wonder-filled memories of that time, although none of them really involve other people. Because in computer rooms at school I discovered people would leave you alone, and you could play, and make things appear on the screen, and make them change, and maybe, eventually, make stuff happen that someone else would see on THEIR computer.

Mental. Really, mental. I mean, of course we take it for granted now. But the comedy here is in the fact that these archaic systems are still used by the travel industry, and that’s something I happily take the piss out of in Enemy of Chaos.

Perhaps the most obvious ancestor of the ‘multiple ending’ genre of books is the 8-bit era text-adventure game.

Better than playing these, which I did, a lot, was learning how to write simple ones of my own in BBC Basic. Mine were rubbish – they didn’t work properly and nothing ever happened. But this kind of manipulation of someone else’s actions was an absolute revelation nonetheless.

Text adventures had a very reassuring shape to them, a way of expanding possibilities while reducing life to a set of directions and choices. There were extremely well-defined things you were and were not supposed to do, a clear-cut rule-led version of daily life… simpler but much more vivid.

People make much of the idea that interactivity affords the player control, but it’s important to remember that the sense of control is matched by the restrictions imposed by the game. Not to analyse this into too much Sartre, but is part of the appeal of these, (and Fighting Fantasy with its charts and upfront 30-pages of instructions) that no one wants to be completely free, after all?

It’s kind of nice to feel that there’s an author-voice – someone who knows what’s going on and what all the possible outcomes will be.

In Enemy of Chaos I look at this for the post-modern issue it is, and kill off the ‘Gamesmaster’ right at the start, but I also try to extract humour in the same way games like The Hobbit, Philosopher’s Quest, and even visual ones like Monkey Island did. And I try to do this by playing knowingly on the fact that I’m directing the action, not you. And I can make you die any time I like! BWAHAHAAHA!

If there’s one thing I love, it’s a good hacker. I think it started with a fascination with Kevin Mitnick in the early 90s. He got caught with a laptop! That was so glamorous to me.

At risk of coming across as even more of a fake, try-hard cock than I surely am, I genuinely love all kinds of code-cracking: Richard Feynman’s recreational safe-busting, that ‘phone phreaking‘ phase, the stuff in Steal This Book about using the mail system for free by putting your recipient’s address as the ‘return to’ address.

What it comes down to is the thing of people going places they’re not supposed to go just for the hell of it. I love Cory Arcangel‘s Mario cart hacks, using his tech smarts to make a kind of weird geeky art and taking it on tour. And I love these things not because of their signifiers of geekiness, but I think… I THINK because of the opposite.

It’s all about curiosity and reinventing – using self-taught geeky knowledge to create something new or make a point quite independent of the geeking. Geekiness has become a culture in itself, with its reference points and its places and its language. It’s become a set of rules, not an endorsement of the joyful, curious, independently thought-out breaking-of-them.

And in a way I think that’s a real shame. That guy who dressed up as Max Headroom and intercepted the TV signal to interrupt a broadcast with a strange and rather frightening critique of 1980s pop culture clearly had the most awesome nerdy smarts. But what really impressed me about him was his insane, ill-advised courage in making his mad statement to slack-jawed American TV viewers in the first place.

All of which perhaps sounds strange coming from someone who’s written a book packed with audience-pleasing nerd-culture refs, but I hope I’ve at least taken something from these guys and that it is, to some extent, somewhat different, and somewhat unexpected.

Leila Johnston is the author of Enemy of Chaos, a facetious fantasy gamebook for adults. www.enemyofchaos.com

Her books are available from all good book stores and Amazon. You can follow Leila on Twitter here.