You are here: Home / Featured / What do the Dork Adore writers want this Christmas? 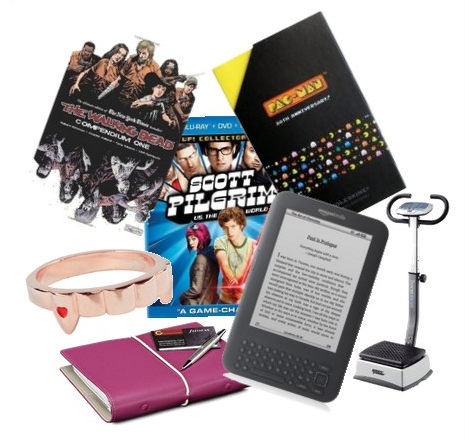 Want to know what the Dorks want in their stocking this Christmas? Here’s a round up of what we’re hoping Santa brings us this weekend. Check out our wish list — which seems to consist mainly of TV boxsets and geek gear.

Thanks to all the positive stuff about Misfits on Dork Adore, I actually watched the second series — and LOVED it! I normally don’t watch programmes out of sequence, so this was unusual for me. To right this wrong, I’d really like series one on Blu-ray.

I also missed Scott Pilgrim, and since I’ve already read all the Scott Pilgrim comics, I’d really like the Blu-ray of the movie.
Finally, I was hunting for an old school Casio digital watch on eBay, only to discover that you can still buy them brand new from Casio on Amazon. Excellent!

I’ve managed to destroy yet another pair of earphones for my iPod, so I’m after a pair of Audio Chi headphones. If Santa is feeling particularly generous, I wouldn’t mind a Power Plate machine at home.  It’s the Slendertone of the 21st century donchaknow?

Realistically though, I’d be quite happy with Kick Ass and Scott Pilgrim on DVD, and maybe a voucher for Abel & Cole so I can start the new year on a health kick.

Nowadays, the huge DVD boxsets are getting stupidly cheap, so my big Christmas presents will be a few of those. I can now get the complete run of Battlestar Galactica, Sopranos, Six Feet Under, The Wire or West Wing for around fifty quid from many online vendors, which is the price I used to pay for a single series.

Oh, and if you liked The Walking Dead TV show, the Compendium collecting the first 48 issues of the comic is good value, and isn’t printed on toilet paper or anything like that. Don’t drop it on your foot though.

Yudu screen-printing: I love screen printing but it is a tad too messy to do at home on a regular basis so I was very excited to hear about this personal screen-printing system.
Pac-Man Volant Gift Set: I love stationery in general and am completely smitten by these fabulous Pac-Man notebooks from Moleskine. Just the ticket for scribbling notes and doodling.
*Love Bites* Vampire Teeth Ring: As I have previously mentioned (in the Etsy Finds: Mmmmm Brains post) I do have a bit of a thing for vampires. This ring will keep me happy while I await the return of my very favourite vampires in True Blood and Being Human!
ChillBots Ice Tray: I am also a massive fan of robots and can think of nothing better to accompany my festive drinking than one of these fellas!

With my old Macbook on it’s last legs I’d love to find a shiny new Macbook Pro in my stocking, but I don’t think Santa is going to stretch to that somehow. I’m pretty sure that he IS bringing me a Kindle however, and I’m so excited about that. I’d also like a renewed subscription to SFX magazine, some new Grado headphones cos mine died a tragic death, a filofax to keep me organised in 2011, world peace and Zachary Quinto. Ahem.