You are here: Home / Featured / Doctor Who Series 8 – The big preview 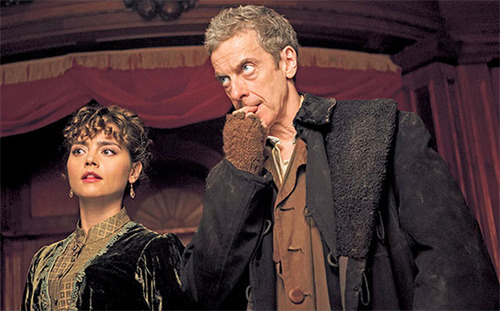 A little over a year after he was first announced as the new Doctor, the time has nearly come for Peter Capaldi to take up reins of the TARDIS. Doctor Who returns to BBC One on Saturday August 23rd, with a full length opening episode directed by Brit horror luminary Ben Wheatley.

Are you ready? Well then, as the title of that first episode suggests, take a Deep Breath…

(Discussion of potential spoilers after the jump, of course.)

In the dying moments of the World Cup, BBC One unleashed their official full length trailer for series 8. If it’s anything to go by, this will be a series where the atmosphere shifts rather dramatically. The droning voice over that indicates a return for the Daleks. The little look Capaldi gives directly into the camera that can only mean he means business.

It’s a Doctor who’s indicating that he wants to start making up for past mistakes – no matter where it takes him. As he indicates to Clara when she asks where they’re going: “Into darkness…”

What we know so far – the potted version

Although plot details are being kept under wraps, there are plenty of things that we already know. Like:

What the speculation is about

The rumours are rife as to who will be the big villian menacing The Doctor in series 8. So far, the word on the street has been split into two camps. On the one hand, and on the back of an earlier teaser, signs seem to be pointing firmly in the direction of Davros – last seen being shoved to his apparent doom by Ten. But on the other hand, an equally tempting possibility seems to be the return of The Master. The internet already seems to be flooded with fan manips casting Game of Thrones’s Charles Dance in the role. Hey, he’s got time now, so why not?

Who is The Gatekeeper of the Nethersphere?

Michelle Gomez takes on the role of Missy, otherwise known as The Gatekeeper of the Nethersphere in the two-part finale. We already know that the Cybermen will invade Earth again, and Kate Lethbridge-Stewart and Osgood will return along with UNIT. But what is the Nethersphere? Is Missy good or evil? And what’s the meaning behind the rumoured episode titles The Gates of Paradise/Death in Heaven?

What will the Christmas special be about?

Your guess is as good as mine. The only person who currently knows for sure is probably Steven Moffat. Which can be either a good or a bad thing…

What I hope to see

What do you hope to see in Doctor Who series 8? Tell us in the comments…

More news about series 8 at