My love of Gtech products has been well documented here on Dork Adore. So I approached their latest model upgrades with some trepidation. What happens if the love affair ends here? It would sully our years of happiness before.

I wasn’t sure I was ready to end it.

But I needn’t have worried. There’s a happy end to this love story. And while we didn’t quite vacuum off into the sunset and live happily every after, I remain a dedicated cordless fan girl.

First up the good stuff 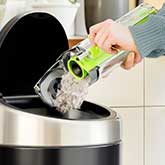 While the previous upgrade – The Gtech AirRam K9 – was basically a minor revamp, the Gtech AirRam Mk 2 has a totally new look, with a more curvaceous chassis and a completely redesigned dirt bin. Emptying the new capsule design is so much easier. Simply slide the tab along and the accrued dust, animal fuzz and plastic children’s tat will glide into your kitchen bin without any drama.

In previous versions, the double dirt tray was on the wide side, obliging users to run the gauntlet when it came to tipping it safely into a bin. It was a failing of the original design that the dirt could so easily end up back where it started thanks to one small slip from the user.

However, you will still need to make sure you’ve given it a thorough shake off. If you don’t, small bits of grit and whatnot that have stowed away in the less accessible nooks like to make a late appearance when you return the tray to its slot. But overall this is a much more winning design. 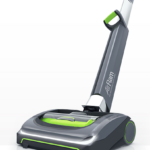 Another winning design is the addition of lights. Lights! Truly we live in an age of progress. No doubt responding to the exuberant welcome the spotlights on the Gtech Multi got, the design team have equipped the Mk2 with its own set of headlights.

It’s such a minor thing in many ways, but it really does improve the whole cleaning experience, to the point where you start to become positively obsessive about capturing every last speck from a neglected cranny in your spare room. 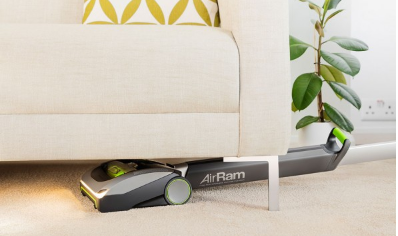 The handle on the original upright gave me considerable trouble, flummoxing me from the outset when I inserted it the wrong way. Presumably I wasn’t the only dum-dum not to read the instructions properly because the next iteration had clear labels to guide you to success. The latest design neutralises the problem altogether: once you’ve inserted the handle the right way, you don’t need to remove it again. You simply press a button and slide the top handle down into the bottom handle.

This is so much better. Now you can can stash the Gtech in a cupboard without having to take it to pieces. And because the designers have kindly left the handle on the bottom half, I can still hang the whole thing flat on a peg. Perfect.

And of course, that same clever design is the reason you can manoeuvre the machine around corners and under things with considerable ease. 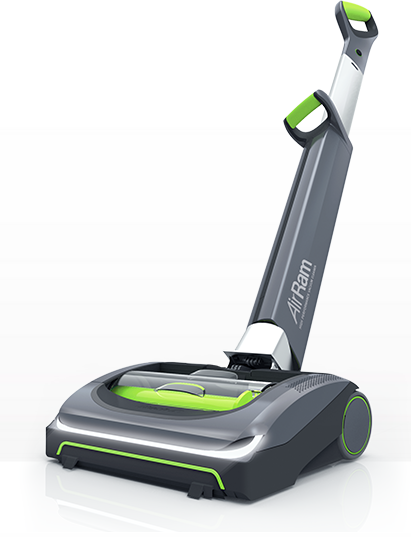 Other design improvements include a battery indicator light you can actually see when you’re vacuuming and a barrel that can easily be removed for cleaning. The latter is particularly important given that this style of cleaner will snarl up with thread, hair or yet another negligently discarded hair bobble.

Speaking of which, the new version will now suck up larger bits of detritus than the previous model.

But what about the down sides?

Well, it’s a problem of the design as a whole that no matter how diligent you are, at some point you will find yourself hacking out bits of Pinkie Pie’s mane while cursing your five-year-old to the skies. I don’t know what it is about this style of cleaner, but it seems like elastic bands throw themselves in the Gtech’s path no matter how throughly I try to evacuate the area in advance.

Edges of rugs, dried up sellotape, iPhone cables, they all seem to be drawn to lights. And because the cleaner can be flattened down, you can insert it under furniture with low clearance. I’ve unearthed all manner of forgotten socks and two pence pieces.

While annoying, in theory this should only be a minor inconvenience. However, as a long-time Gtech owner, the thought of it brings me out in a sweat. Why? Because my first Gtech died an untimely death from eating string one too many times and my second was returned twice for repairs after becoming increasingly shrill every time I extracted yet another bit of dental floss.

What’s more, when it gets snarled up, it makes an anguished screaming sound and then goes into lock down until it’s happy you’ve cleared all its airways. It makes doing the cleaning surprisingly stressful.

Let’s hope this latest model is a bit more robust when it comes to barrel snags.

While the darkest corners and underbeds will be cleaner than they’ve ever been once you have a Gtech AirRam Mk2, you’ll probably find yourself neglecting the stairs. It’s no easier to use on stairs than its original iterations. And it still can’t do skirting boards or cobwebs. But it CAN now do the edges of walls much better than before.

To be honest, this seems a small price to pay for such a convenient, easy to use cleaner – plus it gives you the excuse to by an AirRam Multi at the same time (review of the new one coming soon!). 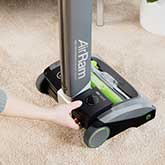 This is a VERY minor gripe, but the new battery design means you can’t use the old ones as replacements. I used to like having two batteries so I could charge one and use one. But the new model uses a totally different battery design. On the plus side, it’s a much better shape for standing and it has a charge indicator.

In conclusion: I love it!

Looking back at my original list of complaints, Gtech has addressed pretty much every one of them (apart from the stairs, but that’s fair enough). By all measures this is a better constructed, better designed, better performing cordless cleaning machine than the previous Gtechs. If you’re looking for something that’s quick and convenient, I’d recommend this over a lot of handhelds on the market, and if you’re after something that’s powerful enough to pick up dirt and dog hair, I’d suggest you seriously consider this little sucker.