You are here: Home / Featured / Come on baby light my fire – candles with a hidden surprise 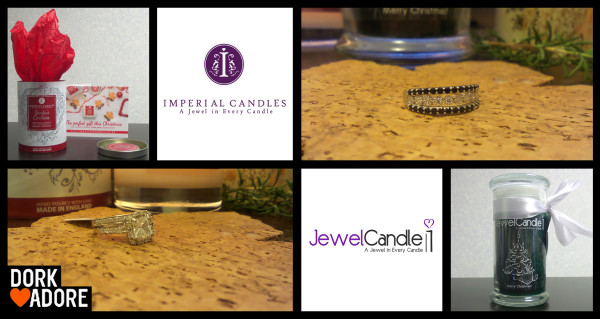 As we mentioned in the ‘house and home’ edition of our Dork Adore Christmas gift guide, concealing a jewel in a vat of scented wax adds an element of anticipation to the otherwise underappreciated art of setting things on fire.

I know this from experience.

I recently got to test out one treasure-filled candle each from Imperial Candles and JewelCandle.

The concept behind the two are the same – you get a wonderfully fragrant candle with a hidden piece of jewellery inside – but there are a few differences which you should consider before choosing which one to go for.

What type of jewellery are you after? 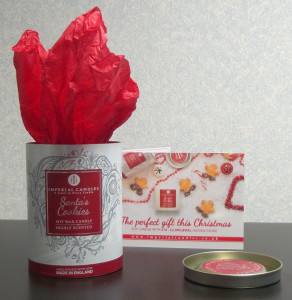 Imperial Candles’s ‘jewels’ are valued anywhere between £10 and £2,000, with those valued £1,000–£2,000 coming with a certificate of authenticity (I believe that with these high-flying jewels you actually get a cheaper item in the candle and a redeemable code for the pricey one, likely so that Imperial Candles don’t wind up losing thousands of pounds worth of jewellery in post-waylaid candles). You can choose between getting a ‘ring candle’, which (you guessed it) contain a ring; and a ‘jewellery candle’, which can have a ring, earrings, necklace or bracelet. All of these are made from either .925 sterling silver, white gold or yellow gold.

Recently, Imperial Candles have also added the chance to win an iPad Air alongside your guaranteed jewel: 1 in 500 candles is said to contain a code for the free gadget.

JewelCandle offer two sorts of jewel candles: those containing rings and those containing earrings. This makes things a bit easier if you specifically want to get someone earrings, or if you don’t know their ring size, whereas Imperial Candles’s products always have a chance of containing a ring. Unlike Imperial Candles’s wares, JewelCandle’s jewels don’t come with an RRP due to legal constraints (this is what it says on their website). However, all of their jewellery is valued at between £10 and £250, and comes with a label telling you the material it is made of.

Both companies advise that a jeweller would be able to give you a more specific value for your treasure.

How much do you want to spend? 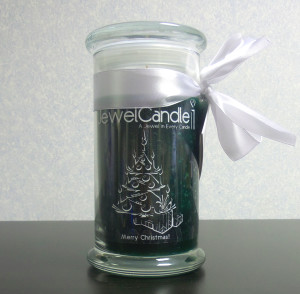 JewelCandle offers the cheaper option overall, with prices ranging from £14.95 for a ‘Sweetheart Edition’ candle to £24.95 for a ‘Classic Edition’ ring candle. It also ships quite quickly, within 2–3 days – I received mine one week after confirmation.

Imperial Candles take a bit longer to ship, with the website specifying that your order should be with you in around 5–7 days, although in my experience this took a few extra days. (A friend of mine has also said that it can take a little while for the parcel to arrive, and she’s ordered candles from them three times now. But she’s totally loved each one.) Their candles are priced from £24.99 for a jewellery candle to £28.99 for a ring candle, although there are other options also available, for example, at the time of writing you could get a bundle of two candles for £40.99 or a cinnamon Christmas candle for £20.99.

Candles from both companies take 10–15 hours to burn down to the jewel, which is enclosed in a protective wrap to keep it safe from the flame and hot wax.

Which scents do you prefer?

Both JewelCandle and Imperial Candles offer a good range of scents. I only tested one type from each company, so I don’t know how true the following is for all the candles, but here’s what I found…

Ok, firstly, I was super excited to receive these and to try them both out. I like jewellery as much as the next person, even though I don’t wear much, but there’s something particularly fun about knowing that a surprise and lovely gift is imminent, and literally watching the candles burn down to show time. It is the candelisation of Christmas.

From JewelCandle I received the ‘Merry Christmas (Ring) Classic Edition’ (the green one bound up with a beautiful white bow in the photos!). It was scented differently from your usual apple-and-cinnamon Christmas candle. It wasn’t oversweet, instead combining tones of pine, something that is reminiscent of candy canes, and marzipan (or so it seemed to me). My mum was visiting at the time and she absolutely loved it. 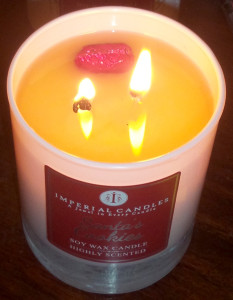 The parcel comes into view!!

Imperial Candles sent me a ‘Santa’s Cookies’ candle, which smelled of sweet cookie dough and vanilla, but also had quite a significant perfumed smell to it (and by that I mean perfume-counter perfume). Both candles burned very well and evenly – the former with one wick and the latter with two – and dispersed a light and Christmassy scent throughout the house. It is worth mentioning that Imperial Candles use a soy wax that is a little oily to the touch and has a lower melting point that traditional waxes, meaning that the hidden jewel and surrounding jar remain cooler.

As soon as the foil parcels became visible I whipped them out with a pair of tweezers in my excitement, ran them under the cold tap just in case and proceeded to unwrap. 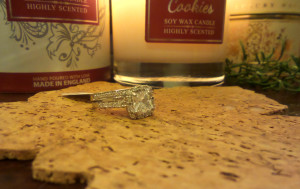 The rings were .925 sterling silver and sparkling with encrusted (if miscellaneous) jewels. Having looked through both the JewelCandle and Imperial Candles galleries in the past I knew what style of jewellery to expect: shiny with lots of stones. Not the style I’d normally go for, but the ceremony surrounding the unveiling of the things made me a) unbearably excited and b) more endeared towards them. Also, the Imperial Candle one was actually made up of two stackable rings, which was a lovely surprise (RRP £30). I highly recommend going through both galleries before ordering as the styles are a little different from one another. 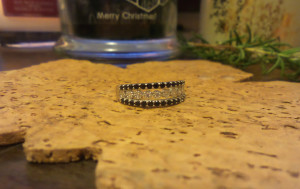 One of the black jewels from my JewelCandle ring fell off.

I hadn’t thought that I’d got a particularly expensive ring, so this didn’t come as a massive surprise, but I was still disappointed. I dropped the company an email and they responded straight away, saying that unfortunately this happens from time to time and that their policy is to send out a randomly selected replacement ring, which I happily received a few days later.

No hassle, no problem – and an extra surprise ring!

Overall, I really enjoyed the whole process of the candles, from anticipating the arrival of them in the post to gradually burning them down (this took around two evenings for each candle) to finally getting to the jewels inside.

I would go for either one again – probably the JewelCandle if I wanted a less perfumed scent and the Imperial Candles for higher RRP stakes.