Those of you who have seen my posts on the Hour of Code and free web-based learn-to-code programs will know that I am completely pro the idea of learning coding – particularly when it involves games and creativity. I wish I had bothered to learn coding and programming when I was younger, only my dad’s idea of a ‘fun way to learn’ was to sit me down in front of Linux and try to get me to work C++. This did not work. At one point he also got me a circuit-building set and pointedly said ‘here, build a radio’ – before looking at me expectantly. Pff, because what kid doesn’t know how to build a radio from a bunch of cables and resistors? (There were probably other aspects involved, but I’ll be darned if I can remember what they were.) Needless to say, this didn’t work either and the set soon found it’s way into the abyss beneath my bed.

Which brings me to KIBO. 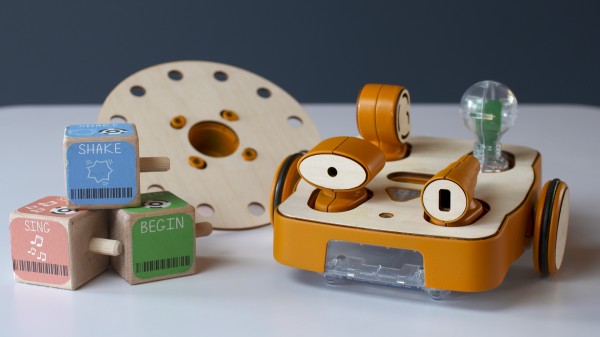 KIBO is a kit designed to teach kids aged 4–7 years to program a chunky robot using little wooden blocks. It is different from other robot kits as it is designed to appeal to all children, whether they’re into technical things, art, dance – or anything, really.

According to KIBO’s creators, Marina Umaschi Bers and Mitch Rosenberg, children are more open to developing new ways of thinking about themselves before the age of 8, meaning that KIBO could help children to understand technology and identify with programming – undoubtedly useful skills to have in a world of constant technological advancement. And all this without the reliance on PCs, tablets or phones.

“KIBO gives children the chance to make their ideas physical and tangible – exactly what their young minds and bodies need.”

The kit is based of more than 15 years of research in child learning with technology and has been designed by professor Marina Umaschi Bers and her expert team at Tufts University’s Eliot-Pearson Department of Child Development. KIBO’s prototype has been tested by 245 pre-Kindergarten to second grade students and 35 teachers. 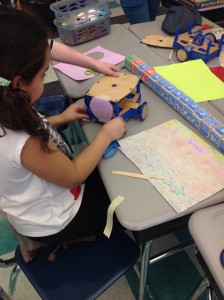 Kids can decorate the KIBO

“It was our top priority to create a platform based on the way that children learn,” Umaschi Bers said. “While there are robot kits available, they are designed by engineers and are made for children aged eight and upwards. From a developmental perspective, it’s important that children learn the basics behind programming and logic at an early age while engaging in open-ended play that encourages problem solving and experimentation. When you’re a five year-old, there’s not much you can build and control in your world, but with KIBO you can make a robot that looks and moves exactly the way you want it to.”

Once funded, KIBO will be assembled in Arlington, Massachusetts. Parents and teachers will be able to access detailed and customisable support, including online and hard copy curriculum materials, design journals, worksheets, workbooks, assessments, games and classroom ‘expert badges’.

For more information, visit KIBO’s Kickstarter page – with just until 29 June 2014 to go, they are more than halfway to meeting their goal. This is definitely one product that would help the next generation get to grips with advancing tech. If you have a little one, or even if you’re just really, really into Star Trek (and the prospect of spurring on technology ASAP), then consider this project deserving of your pledge.