You are here: Home / Featured / The Hour of Code – An awesome introduction to coding

The Hour of Code (UK site here) was introduced in December 2013 to give kids and people who weren’t so hot on coding a window into its process. Code.org, the non-profit running the Hour, wants to introduce coding to schools in particular and highlight the changes set to take place in the UK curriculum in 2014.

“The Hour of Code is designed to demystify code, to show that computer science is not rocket-science, and anybody can learn the basics,” said Hadi Partovi, founder and CEO of Code.org.

Having missed Computer Science Education Week last December, I did the Hour of Code earlier today while waiting for the plumber to show up and fix the boiler (he was phenomenally late) and it was great! It is such a good introduction to coding that I think all kids everywhere should try it. You start off with an Angry Bird (™, I’m sure) that you have to direct towards a pig by dragging a set of commands – ‘turn left’, ‘turn right’, etc. – into a specific order. It feels more like a puzzle game than anything else and before you know it you’re learning! 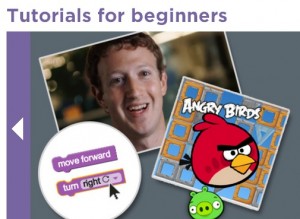 After each of the 20 levels you can press a button that lets you see your instructions written out in code and every few levels you get a cool explanatory video – including several by Bill Gates and Mark Zuckerberg. It’s just really nice and long enough to give you a taste of the concept of coding, but not so long as to bore you.

Immediately after finishing the Hour,I thought, WE MUST GET THIS TO THE CHILDREN!!– because how much fun would I have had spending a lesson doing this? Would it have influenced my academic choices? I certainly remember not being remotely interested when my dad tried to explain coding to me as a child and I honestly think that this would have made some difference. So parents, teachers – I highly recommend that you do check this out! Unconvinced? Just try it yourself…