You are here: Home / Film + TV / The logic puzzle from hell – The Maze Runner – Dork Review 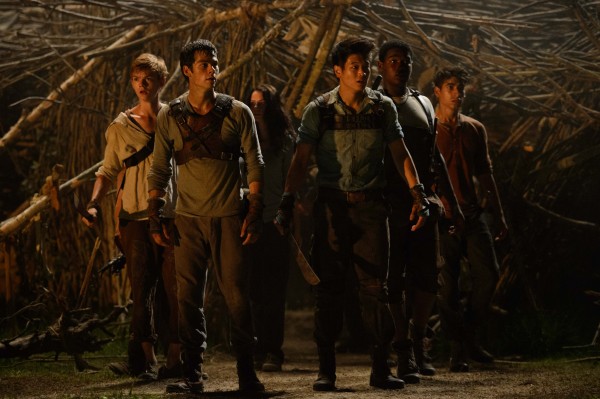 It’s been too long since we’ve delved into the dangerous waters of dystopian YA book adaptations. Based on the novel of the same name by James Dashner, The Maze Runner is the first in a possible trilogy. Filming for sequel, The Scorch Trials, is already under way, and will be released in September 2015. But would that be jumping the gun? Or is The Maze Runner just that good?

Hold on to your hats and dive straight in to the world of Thomas, Theresa and the Gladers…

Based on: 2009 novel The Maze Runner, by James Dashner 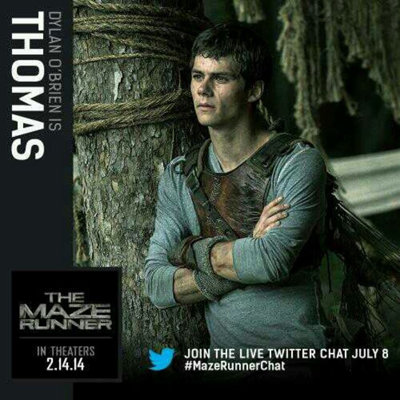 A boy (O’Brien) wakes up in a rapidly ascending lift, with no memory of who he is, what he’s doing there or where he’s going. He’s spat out into a grassy clearing called The Glade, welcomed by what appears to be a tribe of other boys. The leader of The Glade (and its inhabitants, the Gladers), Alby, explains to the boy that he’ll remember his name in due time – as it’s the only thing they let you keep.

The boy, whose name turns out to be Thomas, is soon introduced to the workings of The Glade and is warned not to go beyond the walls surrounding the area as they lead to a gigantic maze. The only ones allowed into the maze are the Runners, the fastest of the boys who spend the hours before dusk trying to map out the maze. At dusk, the maze closes and, as Thomas learns, no-one has ever managed to survive a night in the maze thanks to its inhabitants (creatures called Grievers).

Thomas quickly proves his worth to the other Gladers by saving Alby’s life, but not all of them are too happy with this new turn of events – and things take a turn for the worse when the lift appears, carrying a girl who they are told will be the last new Glader ever. What is the secret behind the maze? And is there really a way out, or are they part of the maze for good now?

As with most dystopian YA adaptations, there’s been a lot of “is this the new Hunger Games?” in the run up to The Maze Runner‘s release. I can see where you could draw the parallels (aside from them both being successful YA novel series), but in reality it plays out like a cross between Cube and Lord of the Flies. From the very first second, it has a pace which will leave you feeling utterly exhausted (but very satisfied) by the time the credits roll.

Teen Wolf’s Dylan O’Brien is very good as main character Thomas, convincingly out of his depth in the strange and dangerous situation he’s (almost literally) dropped in at the start. He’s aided by a genuinely unnerving performance from Will Poulter, as Gally, and Game of Thrones‘ Thomas Brodie-Sangster as the more welcoming and accepting Newt. 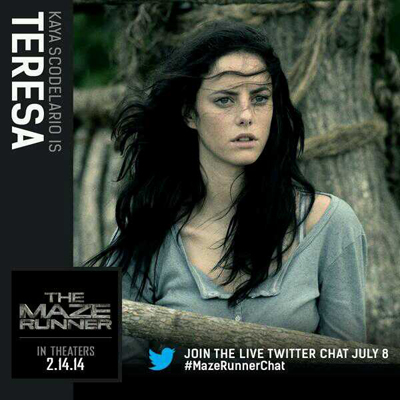 younger than me is a bit disconcerting – the excellent Blake Cooper is only 12… ) and aside from Poulter, Skins-alumna Kaya Scodelario does an excellent job with the material she’s given.

As I mentioned, the pace is relentless and fills the relatively lean running time of 113 minutes nicely. It’s a relief to have such a tight running time for this kind of film – it means that there’s rarely a lull in the proceedings. If you’ve never read the book, you’ll be wondering what the hell is going on for most of it, but you’ll have a corker of a time trying to figure it out.

That said, you’d be forgiven for wanting to sit this one out. With Mockingjay Part One and Insurgent coming out in the next few months, there is no stopping the dystopia. It can be a bit tiring to watch the world end over and over again. And there are only so many shady government officials and teens fighting the system in three or four part adaptations you can take without feeling like you need a sit down and a nice romantic comedy.

Nevertheless, The Maze Runner is refreshing, claustrophobic, excellently cast and (in a rare turn of events) actually better than the book. Wes Ball is a directing talent to watch out for, and with just under a year until The Scorch Trials hits the screens, you’ll be hoping he keeps up the momentum.