You are here: Home / Featured / Merlin: The Castle Of Fyrien – Dork Review 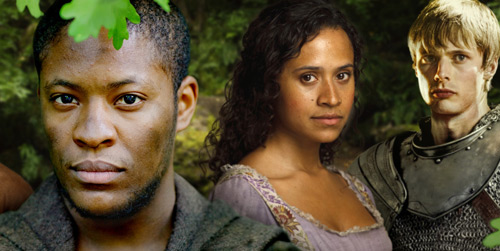 In the old days of Merlin, the whole gang used to go on adventures all the time. Scarcely a week passed, it seemed, when they weren’t sneaking around behind the adults’ backs to save a small child or something. That hasn’t happened for a while, so it’s nice to see an episode in that vein.

Of course, nowadays this kind of story is harder to execute because Morgana has turned evil. So, did it work? Or did that pesky girl spoil it by trailing along behind, whining, sneering and constantly double-crossing?

Treachery! In The Woods!

As moaned about in last week’s “The Changeling” review, among others, Morgana been rather excluded from the group since joining the evil team. You can see why, it would be a bit awkward taking her on adventures when she keeps trying to kill everyone. But there’s also a lot of potential for drama, via Merlin’s vast mistrust compared to Arthur and Gwen’s blissful ignorance, and that’s finally milked here.

So we have our heroes going on a forest adventure, with all the usual antics and simmering romantic tension (obviously I mean Gwen and Arthur, although I’m sure the Arthur/Merlin fan-fiction exists), whilst Morgana stalks around trying to betray them. It probably wouldn’t work every week, but they got a lot of good moments.

Oh, and Emilia Fox is in it, which always raises an episode’s standing for me. I’m impressed they’ve had her on retainer as a pop-in villain for so long now.

And Then It Kinda Stops

The ending of the episode did feel anticlimactic, which is a problem that has afflicted a few Merlins lately. The main conflict was resolved in seconds, with little tension. I do hope that the finale, at least, breaks out a proper conclusion. Perhaps a couple of the five episodes before it too.

And yes, the simmering romantic tension was teased but ultimately went nowhere, likewise most of the ongoing subplots; I’ve somewhat resigned myself to no progress in those until late in the series. But Bradley James did briefly appear topless if you like that sort of thing.

But don’t let the last few paragraphs fool you, I enjoyed it. Just perhaps a little disappointment in the last few minutes. Do watch it yourself on iPlayer and let me know below if I’m being grumpy.