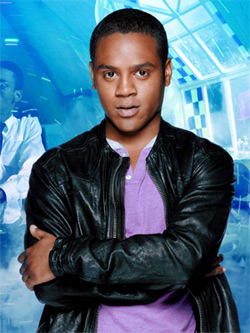 Now that the new character has been introduced, The Sarah Jane Adventures can get down to the serious business of child-friendly adventure. From the same writer as last week’s Sky, Phil Ford, this week sees jovial lead character Clyde Langer faced with a very real threat.

So, can he take it seriously? Can we?

Pleasingly, this is way better than it looked like being, or even needed to be. The gimmick of leaving one character standing alone is one we’ve all seen before, Sarah Jane Adventures themselves did something similar in The Empty Planet. Still, Daniel Anthony as Clyde makes a great fist of it, really selling his character hitting rock bottom, even though we know he’ll probably climb back up by the end.

Obviously, the version of homeless life depicted on children’s TV shows is going to be a sanitised one, but I thought they did as good a job as could be expected ramming home to their audience that this really happens to perfectly normal people, and is horrible.

Helped by the introduction of Ellie, one of those characters clearly designed for the audience to quickly love so we’d all be sad at the end. Still, it worked on me, so I can’t get up on my cynical horse.

In fact, this whole story managed to twang at my heartstrings far more than you’d expect from a so-called children’s show. Whether this is because I am over-emotional as we approach the untimely demise of the whole series, I do not know, but the fact remains, it worked on me.

Considering the show has teased the awkward teenage romance of Clyde and Rani for years now, it’s an intriguing development to introduce a competing love interest, but I can’t imagine they planned to bring her back. Much as I liked her after this episode.

Anyway, I’m happy to report this is one of the really good stories. If next week is decent, and it’s written by Gareth Roberts so really ought to be, at least Sarah Jane Adventures will go out on a high. The trailer reveals that Luke is returning for a visit, which is a good start.

For now, watch this episode on iPlayer if you haven’t already, and let us know how you’re enjoying the show, in advance of next week’s last episode ever.