You are here: Home / Life Dorkage / Want to learn how to speak Dothraki? There’s a course for that. 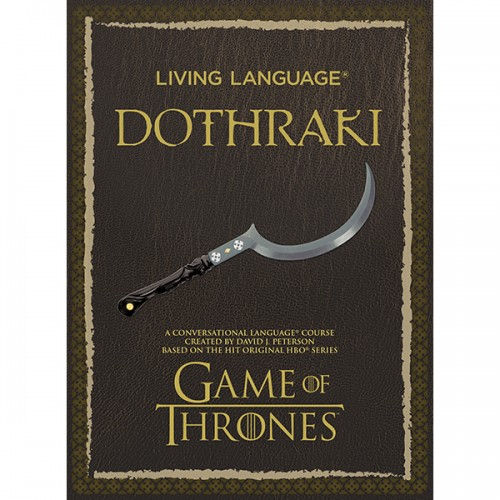 If you’re currently blinking in confusion, that’s Welcome! How are you doing? in Dothraki.

Since it first arrived on our TV screens, with its declaration of the oncoming winter and seeming seas of death, Game of Thrones has managed to become a staple of modern TV culture.

Of course, George RR Martin’s books have been around for even longer, weaving together the world of Westeros since the early 90’s. And with such a rich and varied cultural landscape within the show and books, it seems only natural that there’s now a course that teaches you to speak Dothraki.

And not just any kind of course. This course, by Living Language®, was created by David J. Peterson – the man responsible for creating the Dothraki language for the show. A member of the Language Creation Society, Peterson won the role of language creator for the Dothraki after submitting a 300-page proposal to the show’s creators.

So, right off the bat, you know this course ain’t kidding around.

What does the course contain? 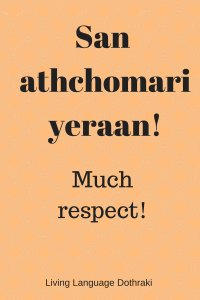 Much like a regular language course, you get both a book and a CD. The book is 122 pages long and is split into six parts: starting with pronunciation, basic expressions, grammar, vocabulary, dialogue and some exercises to finish off.

The lessons contain key Dothraki phrases for things like greeting, everyday life and of course, battle.

The Dothraki grammar is extensively explained, going deep into details and giving you examples of usage. There’s also a glossary of more than 250 Dothraki words, and a healthy helping of cultural information about the Dothraki people throughout the book.

The CD allows you to hear all the Dothraki words and phrases contained in the book, so you can follow along from the start and learn the correct pronunciation. And you will need it, because the dialogue portion of the course contains an entire dialogue between two Dothraki speakers.

So, how did you get on, Jillian?

As I discovered quite quickly, Dothraki is an intricate language to say the least. The time and effort David J. Peterson has put into creating the language is palpable. There are, for example, three different (and correct) ways to pronounce Khaleesi alone, depending whether or not you are a native speaker of the language.

Dothraki does not sit easily on the tongue. It’s a harsh language, demanding to be spoken 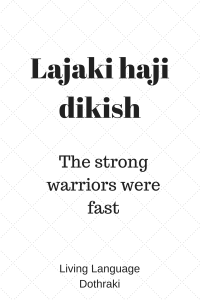 out loud and forcefully (which it actually says in the introduction to the book). It’s also a language you can easily get lost in, with several ways to pronounce just the one word (like my earlier example), the differences in the noun animacy, the lack of an explicit “to be” verb to name just a few.

If you think it’s easy to learn just because it’s a fictional language, you are going to be in for a surprise.

But that doesn’t at all mean that you shouldn’t give it a go. It’s a harsh language, but one that’s also steeped in cultural significance. The Dothraki are folk that take loyalty and respect in highest regard, and are highly mistrusting of outsiders. They have their own mythology, in which the sun is the husband of the moon. All of these things influence their vocabulary and grammar.

Dothraki is a language that will take some time to get used to (and to learn) but it’s absolutely worth trying, whether you’re a language geek (and possibly already have a few fictional languages under your belt) or a Game of Thrones fan – or both.

As a self-study guide, this is a solid, complete way of learning the language (although it might be a bit more difficult if you were to teach an actual course on it). So if you have a Game of Thrones fan in your family, this is a perfect Christmas present.

Get Living Language Dothraki from the following places: HBO Shop

There is also an accompanying app for iPhone and iPad, which you can download from iTunes for £1.99.

Have a look at our Game of Thrones tag for more Thrones action.

*One of the ways to say goodbye – literally translated as be strong.