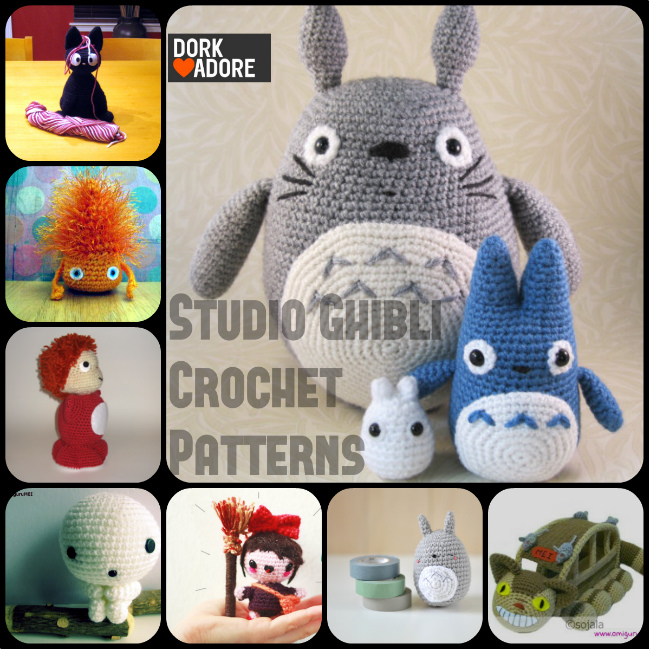 The world of Studio Ghibli is a wondefully magic one, full of forest spirits, witches and fish-girls.

And, as you can imagine, the creatures of Ghibli lend themselves very well to being transformed into craft patterns. You get one guess as to who the firm favourite is – indeed, there are plenty of Totoro tuturials (what a tongue twister) on the internet. But I searched high and low (well, on Google) to bring you the best (free) Studio Ghibli-themed patterns and tutorials.

So, not just Totoro. Although I was tempted because Totoro is seriously adorable.

Ponyo and Jiji the Cat amigurumis

Ravelry user Anne Gee White developed a pattern for an amigurumi version of Ponyo (from the film Ponyo On The Cliff By The Sea/Ponyo). She also made an amigurumi pattern for Jiji the Cat from the film Kiki’s Delivery Service, and both are definitely worth checking out – the results should be pretty awesome, based on the pictures. You’ll need to have a bit of experience with crocheting in the round for these patterns, but it’s not difficult (if you need a tutorial on how to crochet in the round, here’s Wikihow to the rescue).

Anne’s pattern for Ponyo on Ravelry

Anne’s pattern for Jiji the Cat on Ravelry 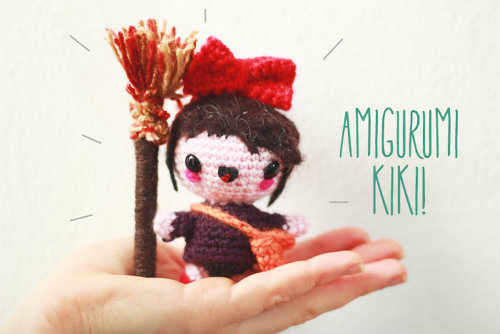 (c) The Sun and the Turtle

If you’re going to make a Jiji the Cat, it would be a bit silly not to have a go at making Jiji’s owner as well, no? Trainee witch Kiki, from Kiki’s Delivery Service, has to be my favourite Ghibli character – and I absolutely adore this pattern designed by Jennifer Ramirez from The Sun and the Turtle. The site indicates that this is a more difficult pattern, as you’re working with more than one colour and more than one individual part, but it should still not be too much of a fuss to complete. There’ also an accompanying Jiji the Cat pattern, which will give you a tiny Jiji to sit on Kiki’s shoulder.

If you’re in a Kiki making mood afterwards, Kawaii Japan Lover Me has a great tutorial on how to sew up your very own Kiki hair bow.

Howl’s Moving Castle and Princess Mononoke are two seminal Ghibli favourites, both keeping the classic Ghibli wonder but adding a whole dose of adult drama and emotion on top. This pattern of Calcifer, the fire-demon who is the source of all energy in Howl’s castle, was designed by Ravelry user djonesgirl. The pattern seems pretty easy and looks to be ideal if you’ve only got a limited amount of time to make something in. Plus, you don’t have to waste any yarn as you can easily make several of them.

You’ll need a little bit more time to make this Kodama, designed by amiguruMei. These tree spirits from Japanese folklore appear in Princess Mononoke, where they are portrayed as small, white humanoids with large, rattling heads and mask-like features – and that look inspired this pattern.

Oh my God, the Catbus. Even if you’ve never seen a Studio Ghibli film before, there’s still a good chance that you’ve seen a picture of the Catbus from My Neighbor Totoro. The Catbus is a large creature, depicted as a grinning male cat (similar to the Cheshire Cat from Alice in Wonderland) with a hollow body that serves as a bus, complete with windows and seats coated with fur, and a large bushy tail. So, a bit more appealing to ride in than your average London bus, definitely.

This epic pattern, designed by Sharon Ojala from Amigurumi To Go, requires dedication and a heck of a lot of time, but the result is worth it – I mean, who wouldn’t want their own Catbus?

And speaking of My Neighbor Totoro… 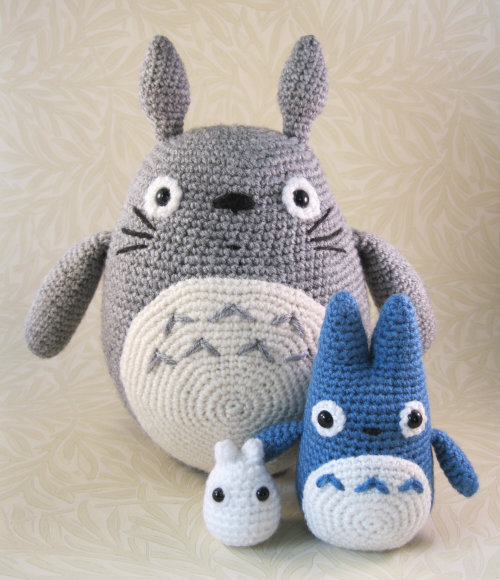 What? I said I wouldn’t make them all Totoro! I didn’t say I wasn’t going to include Totoro!

Ahem, anyway. Of course there are some wonderful Totoro projects out there, and I’ve got a small selection to unleash on you.