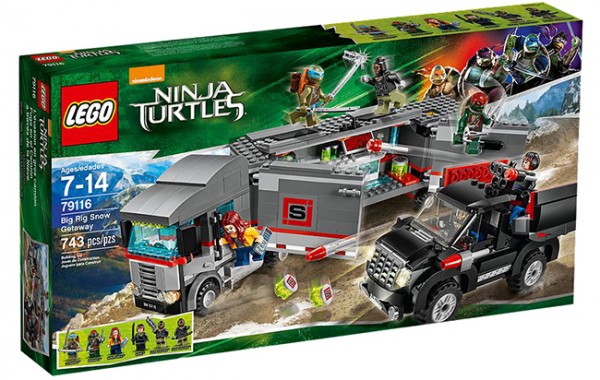 What a magnificent articulated lorry and jeep!

I’ve lived through one movie incarnation of the Teenage Mutant Ninja Turtles (TMNT), and I didn’t really think that the world needed another one. But then, along it came, and it proved just how little I know. Grossing $185,018,000 the new film made four times as much as the first movie from 1990, and turned four rubbery, cheerful nunchuk-wielding mutants into pumped-up grump-meister world-savers.

Nevertheless, if there’s one good thing that came out of the reboot, it was that new LEGO sets made specifically for the film. They even rebooted the minifigs, though the less said about these new-look movie Turtles the better, really. They’re grumpy and lacking in character, totally unlike the previous versions.

One’s super cool, the other’s a bit grumpy. Not overly sold on the movie minifigs.

But to moan about that is to really sell these sets short. The vehicles are of the highest quality, with moving and firing parts and excellent design.

I was lucky enough to make the Big Rig Snow Getaway set, which comes with six minifigs, including April, Raphael and Leonardo. The articulated lorry was a real joy to build, with excellent weight and size. It’s really strong, too, with a tough old chassis base, and will take a right playtime battering I’m sure. The trailer opens up brilliantly to reveal a laboratory full of nuclear gubbins and syringes. These are all the things I love about LEGO – the joy is all in the detail, and this set has it in spades.

And then, of course, there’s the jeep. This is a super bit of modelling, involving an opening back which lets the hidden baddie swoop out and up with her guns. It’s really cool, as is the Karai minifig. She has a terrifically severe bob hair-do, which is a winner. 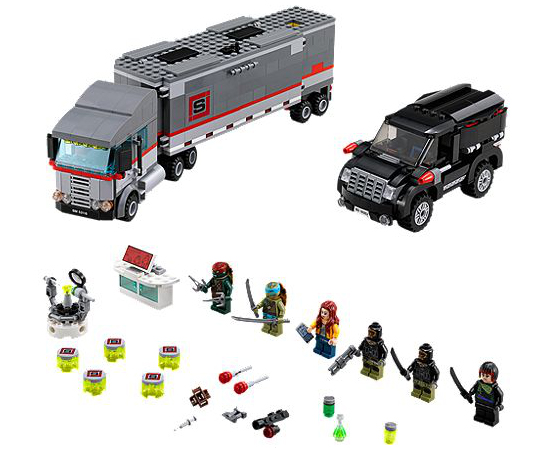 You get a lot of minifigs! And also nuclear goop firing missiles.

So yes, if the world has to put up with more overblown Michael Bay films simply so that we get more LEGO sets, so be it. This one is brilliant.

Check out the real thing in my video review. In this review you will witness my green TMNT-inspired wall, my green shirt and green hoodie, as well as Milo the cat (who is sadly not green).