You are here: Home / Film + TV / Game of Thrones S2 Ep2: What is Dead May Never Die review 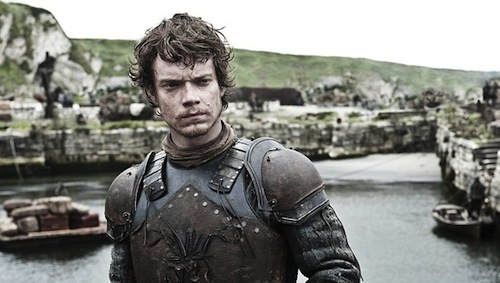 Firstly, apologies for missing last week. The grand plan to watch on Sky Player whilst on holiday was thwarted by a total wi-fi blackout in the holiday cabin. I nearly died.

While I was trying to re-learn the rules for Cribbage and score more than five in Scrabble, Tyrion was getting to grips with being Hand of the King, and Cassie from Skins was proving to be less annoying now she’s a grubby daughter-wife trying to escape her father-husband.

Episode three brought more of the same – Tyrion proving artful as ever with a short game of of ‘smash the rat’, Cassie’s teeth taking centre stage, Shae (Tyrion’s unlovable love interest), pouting and stamping charmlessly about the place, and Littlefinger chewing over his English accent while we all sighed for Aiden Gillan’s lost charisma.

Back in King’s Landing, poor old Sansa continued to look red-eyed and haunted. She’s so much less annoying than the whining child in season one, which is why it’s a shame she’s been lumped with Shae as her inept handmaiden. The girl deserves a break.

But the star of the show this week was the marvellous Yoren, Arya’s gruff ally from the Night’s Watch (who seems to come from the part of the North with a Lancashire accent instead of a Yorkshire one). He’s stolen every scene he’s been in so far. This week he had such a great monologue that it came as no surprise at all when he got skewered like a stuck pig five minutes later.

So what next for the ever-expanding cast of Thrones? Will the newest tough lady on the block, sword-wielding Brienne, win our hearts as she does in the books? Will Tyrion really sell off his niece as a peace treaty? Will Joe from Skins ever get to the Wall so he can reunite with Cassie? Will Bran ever have a good night’s sleep?

Tell us what you thought!