You are here: Home / Featured / Game of Thrones: Season 4 – “What was happening again?” – Dork Reminder

As you may have noticed, we’re fast approaching the return of Game of Thrones to TV. Westeros spurts back onto HBO on Sunday night, then dribbles down onto the UK’s Sky Atlantic the following evening. Last year, as I chronicled in a memorable and insightful series of reviews, the machinations continued in King’s Landing, things got desperate on The Wall, John Snow finally returned to his brothers and loads of people marched through forests.

Not to mention, of course, the Red Wedding, in which the nice-but-dull part of the cast was brutally pruned. So, what was everyone up to again? Where are we going? NOTE: No, there won’t be any damn dirty book-spoilers in this post.

Yet Another Royal Wedding

The most obvious flagged event in this new season: teen tyrant Joffrey Baratheon, child of incest and most loathed manboy on television, is due to marry Margaery Tyrell, whose name-spelling I had to Google. The most intriguing part of this union: the Blond Bastard’s betrothed could be almost as ruthless as him, although not as prone to disturbing sexual violence.

Still, no matter how well matched the pair might seem, getting married in Westeros hasn’t been a great idea lately. Just ask Tyrion or Sansa or Robb Stark. And speaking of which…

“So, how about that Red Wedding, eh?”

After all that bloodshed at the end of last season, you’d expect some consequences. After all, not only have the Freys and Lannisters breached the sacred rules of good hosting (the scoundrels), they’ve killed the leaders of their sworn enemies, and Roose Bolton has betrayed the shit out of the whole North. Will there be any vengeance? Might Sansa finally do something? Arya’s becoming harder-edged after her recent travels with The Hound, time for her to take action after all that forest-mithering last season? Could Bran maul them with his wolf-possessing powers? 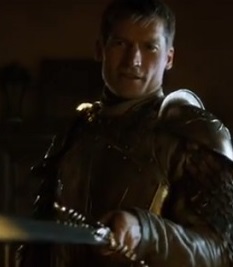 Based on the trailers (or see image on right), it looks like Jaime Lannister is back in suave, well-groomed King’s Landing mode, after spending the last couple of seasons as the most snobbily droll tramp in the woods. But will his newfound conscience make it harder to blindly follow Daddy’s evil orders? Or is he happy to slaughter any poor sod as long as he gets to resume his incest schedule with Cersei? But will she still have him with only one hand? So many questions – and Jaime’s storyline was a highlight last year, so I’m looking forward to seeing them answered.

Anyone for staring at The Wall?

Much as I enjoy Jon Snow’s tortured facial expressions, the oop-North sections of Game of Thrones are not always the most engaging. But will shit get more intense now Snow is back with the Watch and they’re facing imminent peril? Not to mention: Stannis Baratheon is on his way to join them, and that dude can perk up any situation with his infectious charisma.

The international antics of Daenerys Stormborn have provided both some of the show’s most memorable storylines and a few of the most tangential and forgettable. Which will it be this year? Well, she has to deal with governing an entire city and her love interest Daario being re-cast, and she’s still got the dragons. Hopefully the Mother of Dragons will get some intrigue to rival King’s Landing.

Remember when Tyrion was one of the main characters? Back in the first two seasons? I loved the third year of Game of Thrones, but will admit to hankering for more half-man. Hopefully his political marriage to Sansa, now complicated by that darned Red Wedding, will give Peter Dinklage some meatier material to play. Even if not, he’ll probably still get all the best lines.

I think that’s all the main storylines covered. Hopefully they’ll surprise us with new and exciting plots too. Either way, I’m seriously looking forward to the new season starting on Monday. Exciting times.

Theon Greyjoy Has No Penis

No sir, he does not.