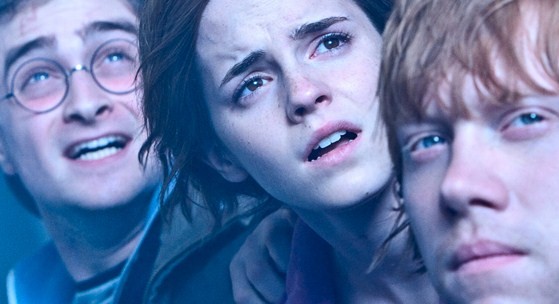 So after seven feature films, ten years, a handful of young lives changed forever, millions of pounds spent – and made – and several directors, the Harry Potter series of films comes to a close with Harry Potter and the Deathly Hallows Part 2. And it sure goes out with a bang.

First, full disclosure: I am *not* the world’s biggest Harry Potter fan. It’s not that I actively dislike the books or films, simply that I’ve never really got into them. So it was with interest, but not eager enthusiasm, that I came to this final installment.

It might be an even bigger compliment, then, that I enjoyed this film as much as I did. It is one classy piece of filmmaking — and who would have guessed we’d be saying that about the last film on the strength of the first?

On one hand this film has to deal with a lot of detail: finally explain the connection between Harry and Lord Voldemort, satisfactorily handle the relationships between Harry and Ginny, and Ron and Hermione, reveal a fair bit of backstory with regards to Harry… On the other hand, it is essentially just one big battle; the final showdown between Voldemort and his evil minions, and the good wizards of Hogwarts.

Director David Yates handles both elements of this very well — it truly is epic, heightened storytelling in terms of both the emotions that the characters must go through, and the scale of the plot. And before we get to the wands-at-dawn that we’ve been waiting for, we even get to have a bit of fun. The escape from Gringotts Bank on the back of a weak, formally captive dragon with paper-thin wings is superb, and Helena Bonham Carter clearly has a ball playing Hermione trying to pass as Bellatrix.

And when we finally get down to the business of the final battle, it’s impressive stuff: we see stone soldier statues come to life to defend Hogwarts, a protective shield placed around the school by all the teachers, and the Quidditch stadium ablaze. It is dark and apocalyptic, just as it should be.

Among all the fire and brimstone of the finale, however, space is still found for some of the “background heroes” of the films to shine. Even within the Harry Potter world itself, there is the feeling that while Potter gets all the glory, others have to sacrifice just as much, and be just as brave in the face of he who must not be named, without getting the same credit — until now.

In particular, Neville Longbottom (a very funny Matthew Lewis) shows his inner-strength, and Ron Weasley (Rupert Grint) — forever overshadowed by The Special One — here gets to do more than turn and run (and scream). One of the sweetest moments in the entire film, in fact, comes when Ron takes on Draco and his henchmen single-handedly, and Hermione can’t help but beam with pride.

But, while the acting from the young cast is very good, and it looks brilliant, HP7.2 is not without its failings. In particular, without wanting to give away the ending (but probably doing so, so tread carefully if you haven’t read the books), there is a slightly anti-climatic feel to the very final fight between Harry and Lord Voldemort. We had been told that there must be a huge sacrifice, and in the end that is never really forthcoming. Plus, there is a rather indulgent coda which — while perhaps excusable — does not have the same lightness of touch which makes the rest of this film so enjoyable.

But these are quibbles, and if this film can satisfy even a muggle such as myself, I’m sure the real fans will be utterly delighted — not to mention in floods of tears come the final moments.