You are here: Home / Featured / Is Avatar’s Tree Of Souls in Hyde Park worth seeing? 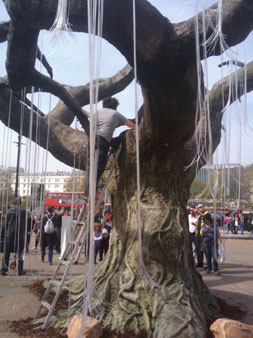 To coincide with Monday’s DVD release of James Cameron’s blue-skinned elf-fest, an “installation” of Avatar’s Tree Of Souls was to be erected in Hyde Park over the weekend until the 26th April. It would apparently be interactive, fibreoptic, iPhone compatible, shiny, modern and shiny.

Since I had nothing better to do thought this was of great cultural importance, I went along to check it out. The sun was shining as I wandered into Hyde Park, in the mood to be impressed. Hopefully, it would be epic and the size of an oak tree.

It was neither of those things.

In fairness to them, if this tree had been in the Oxford Street branch of HMV, I’d probably have been impressed. It certainly beats the cardboard cut-out elf-people. But by displaying it in the harsh light of day as an “installation”, they built unwise expectations.

It’s a plastic tree, about as tall as two tall blokes standing on each other’s shoulders. There are fibreoptic cables hanging off it and a few speaker connectors as well – I managed to use one of these to make the tree play Arcade Fire. That was nice for a couple of minutes, until a fellow member of the public put on some garage and drowned me out.

A poster nearby claimed that I should have been able to connect with my smartphone, but this functionality appeared to be broken, no matter how long I spent fiddling with my wi-fi settings. A man kept climbing the tree with a ladder to fiddle with the insides, but this didn’t help.

So I took photos for some tourists and went home, somewhat disillusioned. Avatar, by the way, is a film so visually beautiful that it manages to transcend a predictable storyline. Alas, this incarnation of the Tree Of Souls doesn’t quite live up to that.