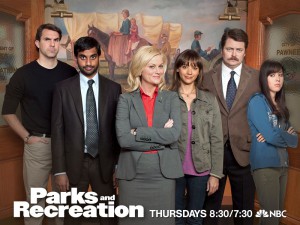 Last time on Parks and Recreation, we learned all about the joys of canvassing. And… yeah, that’s about it really. Lots of canvassing went on. And a smidge of filibustering. But just a smidge.

This time around, Leslie tries to weasel her way in with the political old boys and Andy has a surprise for Ann. If you’ve not seen this yet, you know what to do… get thee to iPlayer and catch up!

Special mention goes to the cold opening of this episode, where Leslie and Tom go to research a complaint about kids having dog poo (yes, you heard it) fights on a nature trail. Tom quickly scurries off and goes to hide in a car. Leslie… joins in. And sort of likes it.

Leslie’s moral code gets tested this week, as the office receives a gift basket full of fancy wines. She states that the office is not allowed to accept gifts over 25 dollars (for bribery reasons and that) and hides the basket where no-one can reach it (under her desk).

Leslie then laments over Mark’s drinking rituals with the “political old boys club” and she and Ann decide to join in. When they run out of beer, Leslie finds herself forced to break into the gift basket. This tears her up and the following morning, she issues an apology.

Of course, in true Parks and Rec style, things go wrong and a video of April the Intern getting drunk on one of the bottles of wine surfaces. Leslie gets a committee hearing, but is bailed out by Ron.

In a neat (literally) B plot, Andy does his best to clean the house for Ann, who is on a double shift at the hospital. What do you expect…. things go wrong.

Four episodes in, and I like the way where this is going, but I still have the same hang-ups when it comes to characterization and under-usage of Ron Swanson (although less so in this episode). Leslie’s old feelings for Mark surface again, as she tells Ann that she deliberately stole the wines to impress Mark and his boys club. Tut tut, Ms Knope. Tut tut.