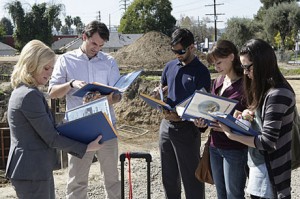 Last week on Parks and Recreation, a reporter came to cause a spot of bother, Ron made himself out to be the king of Scrabble and I learned to my horror that I had been spelling Leslie Knope’s name wrong in all my reviews so far.

No better time to right the wrongs! This week… Well, you’d have to read on because telling before the jump is spoiling.

And there are spoilers here, so get yourself to iPlayer first!

“Let’s blow in each other’s faces!”

After a cold open in which the Easter egg hunt goes a bit wrong, Leslie goes to meet up with her mother, who is an official with the county school system. She invites her to a meeting with her subcommittee, but Mother Knope does not appear interested. Leslie is then seen with the committee at a meeting, where she suggests a new tactic for gaining interest in the construction pit : Canvassing, or door-to-door bothering of people. Nobody really likes this approach, especially when they see that Leslie has written out scripts for them to follow (“In case the person looks like a celebrity, turn to page 11”).

Needless to say, the canvassing goes very wrong. When Leslie asks Ann to employ harder tactics (push polling, they call it), they encounter a mother named Kate Speevak, who is vehemently against the park for reasons unknown. Leslie then accidentally insults her, prompting her to show up at the meeting the next night.

The meeting, of course, goes horribly wrong (I feel like I’ve used those words a lot…) but Mother Knope does attend and Leslie manages to postpone a vote on the parks project until a later date.

We are three episodes into the Parks and Rec experience… I can’t believe I just said that. Anyway, three episodes in and I am left with the same problems. There’s little to no characterization, little to no use of Ron Swanson and Leslie Knope is still a bit annoying. But, as Leslie herself at the end of this episode, I remain hopeful. Mainly because I’ve been told series two is much, much better.

All in all, this was a good episode despite the irks I mentioned. Introducing Leslie’s mother was a good touch and Kate Speevak is the right kind of annoying to be an adversary to the plans.

On to the next episode!