Hello devoted fans and eager headhunters. Aren’t you tired of having to support the full girth of your tablet with your thick, fleshy fingers? Wouldn’t you love to be able to hold a hot dog in one hand and a beer in the other whilst staring morosely into the void of the internet, able to occasionally swipe at the screen with a sticky little finger to scroll? Don’t you crave the day when you can watch videos and at the same time take a bath without having to keep your hands elevated over the surface of the glorious, all-encompassing heat of the water?

Well of course you are/would/do. Luckily for you, I have just the solution. 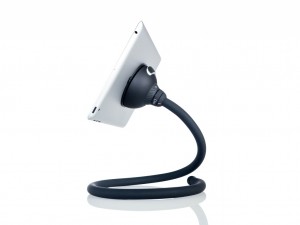 Available from £49.99 (@ Selfridges – the cheapest I could find online outside of eBay)

Firstly, can I just say that Octa missed a trick when they called their product a Monkey Kit? I mean, I can certainly see the reasoning behind the decision (in that it resembles a monkey tail and is similarly able to grip onto things) but surely a company called ‘Octa’ ought to have gone for a tentacle theme? I can only stem my disappointment by envisioning that they will someday release a similar device with seven more tendrils and jump on the missed opportunity then. (They do have a WhaleTail as well, but that doesn’t quite have the same ring to it.)

Now, for the actual review.

I actually put off testing this for a while because it looked like a slight bother to assemble. And, in fact, it was – but only because I didn’t check the instructions first, being of that common mindset that sees instruction-reading is a vastly time-consuming and generally unnecessary part of the assembly process. As usual, I was wrong and, after struggling for a good few minutes to attach Cone A on to Suction Cup B in a manner not dissimilar to that of my one-year-old niece trying to attach my phone on to her dinner, I checked the instructions (which were thankfully illustrated). After a few moments (and some more instruction-less whacking together of Suction Cup B and my unfortunate tablet) I was good to go.

B-T-Dubs, the tablet I’m using for this review is a Nexus 7, which is about the size of an iPad Mini.

The tail does make the tablet feel significantly less mobile, although really it’s straightforward enough to detach. Saying that, Octa’s website markets the MonkeyTail as light and easy to transport – it’s actually a bit bulky and certainly has some weight to it, so much so that I wouldn’t really want to carry it around. The little pump-up button on the side of the suction cup is a nice touch – you press it to suction seal your tablet to the tail, and you can tell when the hold is loosening because you can see the button gradually rise back up. This gives you some warning of an impending disaster and lets you strengthen the hold again with a couple of easy presses.

Also, I don’t think this is particularly relevant, but it turns out that the rubbery knob at the end of the tail attracts mosquitoes – or, at least, this one mosquito that was in my house at the time of testing could not get enough of it. 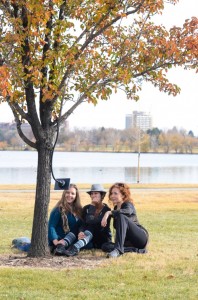 The MonkeyTail in the wild. Credit: Octa

Ok, so at this point I had fused together the MonkeyTail and my Nexus 7 and I was ready for action. The first thing I tried to do was attach the whole contraption, which was remarkably sturdy as a single piece, on to the arm of my chair. It was… exceptionally awkward. There was a lot of sliding and rotating involved, and I found it super difficult to find a way of winding the tail around the wood in a manner that wouldn’t result in the whole thing somersaulting to the ground.

I think the problem here was that the tail, while flexible, cannot bend to such a degree as to grab hold of something and stay holding it through pinch-action alone – the hold tends to loosen slightly and it slides. What the tail relies upon is balance and overall positioning, so that all of its parts are holding on at a different angle, thus stopping the heavier end of the contraption from dropping. The chair arm I was using was not conducive to such an ambition. I moved on.

Thicker wooden arm of a futon. This was significantly more successful. The tail could wrap around it in such a way as to prohibit any wanton spinning, and it felt very sturdy. In fact, I was quite surprised at how convenient it was having the tablet hover there by itself as I had previously harboured the notion that a tablet holder was something rather spurious. But now, I can totally see the appeal.

So that’s one point to the Monkey Kit, one point to cynicism. Now, let’s see how it fared in these other positions. 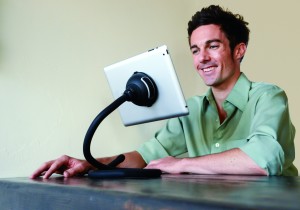 This charming fella is using the ‘Cobra’ stance. Credit: Octa

The Cobra: Totally works. The tablet, understandably as I’ve just suspended it on a strange rubbery spine, shudders when I swipe at it, but everything works. And, more importantly, it’s been up for about ten minutes now and it has yet to fall off. Point to the Monkey Kit!

The Lurker: This one didn’t go all that well. I coiled the end of the tail and slipped it under the cushion of my sofa (as per instruction-manual suggestion, no less). While this worked, the contraption did move from side to side when Gaius tried to check how his Springfield was doing on The Simpsons: Tapped Out. This is understandable as the thing holding it in place was a soft cushion rather than anything a bit more solid. Nevertheless, life is not fair and therefore: One point to cynicism. 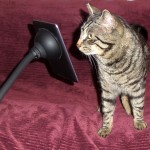 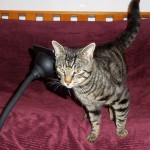 The Peter Parker: Because Spider-Man is what normal people associate with cooking. This time I just hooked it over the top of a kitchen cabinet, ready for cooking-by-numbers. It worked fairly well – again there was some instability at first as I hadn’t wrapped it around anything, but this could be easily rectified with some, well, wrapping. Point to the machine.

The Rudimentary GPS: And by that I mean I managed to wrap it around the front of the bike. Not very securely, but I think it would work while riding (if my tablet had 3G). However, at this point I feel the need to remind us all that when it comes to compromising road safety, there are no winners! Nul points to both contenders.

Loch Nessy: Ok, here’s the moment of truth: my tablet and only means of surfing the internet from home at a speed greater than 5 kb/min is leaning, face down, over a steamy bath full of water and terror (that’s me). And it’s FINE. Thankfully. And super convenient, actually – except I have to keep at least one hand dry to take care of scrolling. I should hasten to add that my bath is one of those old metal ones so it has a lip going all around its circumference, making it easier for the MonkeyTail to keep hold. And, despite the instinctive panic I feel over letting a piece of very breakable tech loom over a body of water, it does. Point to the MonkeyTail!

And the winner is… The MonkeyTail!

Good show, cynicism, but today you walk away empty handed.

So, there we have it – the Octa TabletTail Monkey Kit works. Does it work well? Yes. Was it a direct factor in my tablet’s inevitable (and tragic) demise? Not yet. Would I pay £50 for it? Like most things, probably not. But, have I been converted? It’s hard to say – I can definitely see the benefit to having one now, I just don’t think I need one. But, if I did want to get something that would hold my tablet for me, I would probably go for the Monkey Kit.